Staffordshire NHS Death Camp For Some 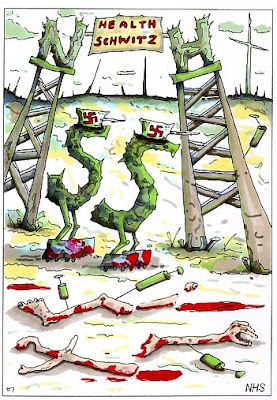 Staffordshire NHS Death Camp For Some ?
No , Its not an over dramatic headline at all, for up to 1200 people admitted to the Mid Staffordshire Hospitals Trust may have died as result of poor care .

The death rate there exceeded the expected range by quite a lot and the UK Health Care Commission investigated . The media in the UK is full of the story :
Telegraph
BBC
Independent
Its our studied opinion at UserWatch that the pressure that produced that situation of poor care was the great NHS Foundation Trust Status rush . Foundation Trusts have to prove they are "debt" free, hold surpluses and then they can enjoy greater autonomy - their status is then assured by a Watchdog named "Monitor" . These latest events in Stafford near the midlands have seen the Gov't. trying to side step its own part with its pushy ambitions in 2006 - 8 in trying to create these Foundation Trust hospitals all across the UK .

In Birmingham, UserWatch saw the rush too to "clear Debts" in the local Hospitals .. The Mental Health Trust was keen and tightly performance managed so that it cleared several million in one year before it then created a bankable 1+ Million surplus and was granted Foundation Trust Status . Its heading towards a projected £5 million surplus next year ..Is it good for patient care? That is very debatable .

"Debt" in Trusts was defined when a Trust exceeded the Dept of Health allowances it was given per annum and then it was expected and pressured to clear them.

So if Trusts were say , "£3 million in Debt" - they would have to save that £3 million by underspending on care the next year .. The underspending is not called that though. In reality it means not recruiting staff where you need them, and patient care goes by the wayside or is rationed tightly.

In Mental health Trusts this is probably more concealable and patients without therapy or support just suffer internally more .. Who is to see that, if the patient categories are not crisis ones ?

In the Stafford Trust, death was not concealable from physical manifestations of bad health and poor hospital care and staff rationing . Many deaths occured because as the Guardian states :

"Few patients were given the drug warfarin to help prevent blood clots despite deep vein thrombosis being a major cause of death in patients following surgery."

"The Trust - which was under pressure to save £10m from its annual budget - was more concerned with hitting targets, gaining Foundation Trust status and PR marketing and had "lost sight" of its responsibilities for patient care, the report said. "

A director of the local Patient Association said :

UserWatch is mainly a Mental Health Watchblog and we know its easier to conceal what patients feel and what mental health pain they are in. That is the great sadness of mental health in so far as so much extra suffering can be caused and concealed by ambitious money saving Trusts and is left inside the mind of patients where its not easily seen ..

The terrible shock of Mid Staffordshire Trust though we feel has yet to run its full course and there may be other stories like this to come ..

Email ThisBlogThis!Share to TwitterShare to FacebookShare to Pinterest
Labels: staffordshire NHS death Camp for some UserWatch In Birmingham and Solihull