Mental Health and NHS PLONKS Scrutiny Org Is Set Up 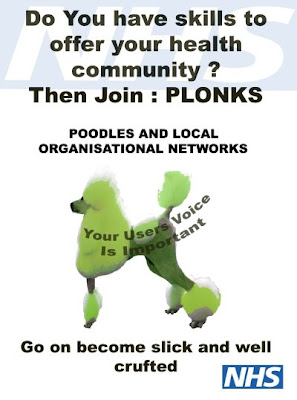 A Story Of Upside-Down "Re-engagement"

"Now we have a chance to join the NHS orientated PLONKS . We'll be able to eat great food at last and have "juicy-meatings"..."

We tried to tell these oodling prospectives that Patient and Public Involvement Forums pre March 2008 had been poor to middling bone chasers and scrutineers of local health systems. We tried to say that Local Involvement Networks had now taken over and were busily engaged in scratching or doing somethings nobody can quite see into ... But who gives a sniff anyway ..

Once again the politically orientated DOH and the Govt are trying it on by creating new "Patient and Public orgs in an effort to close the large "engagement" gap of the grand canyon yawning public.

The public respond best to being able to be directly empowered and the NHS is not at all empowering of state assisted Patient Choice which is the only true democratising quality driver of health supply ..

For Labour the preservation of bureacracy at the expense of health has been experienced by many mental health Users ... These Users are not the ego-poodle class though ... Their barks are lost or are drugged into social oblivion .. Their kennel provinces been taken over too by others who wear underdog fur over poodle-class attitudes ..

There's always some like this - actually there is quite a lot . Personal Success is equatable in the mental health service economy to being unreal, bureaucratic and inauthentic and preserving bureaucratic power and getting false jobs that fleece real Patient Choice as a deeper reality ..

The real problem is that being Individual in a neo fascist service state service economy is seen as the enemy and yet services are best negotiated by individuals outside of monopoly supply ..

For the next few years PLONKS will be barking here and there .. And in one way or another we are all part it .. We are passive scratchingly mostly active democratically paradoxed plonkers .. The Gov't set the agenda and mass kennel context ....... The DOH just get rich on it so do others in the NHS where the top is poodled and trained to look very very sweet and pampered ..

.
Posted by PatientGuard at 7:54 AM No comments: 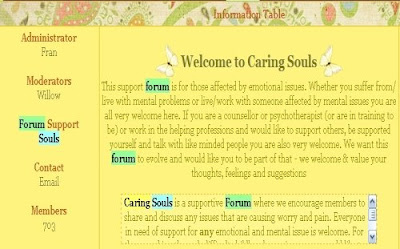 Some mental health Users in the UK contacted UserWatch regarding the sudden apparent demise of the Caring Souls Forum .. (see here)

From what UserWatch can gather the Forum started with good intentions and existed for 11 months up till a few days ago and it gained a following of people (703) who wanted to talk about human difficulties , pain and life ..Some had dissociative disorders and others had eating disorders and there were cases of people trying to come to terms with child abuse issues.

We invite the admins of Caring Souls Forum to put their views here or elsewhere where we have links since the forum was supposed to be backed by professionals and act as responsible interface between people in therapy training , therapists , counselors and sufferers from the human condition ..

More lately apparently a female poster (no poster-names given here) opened up about some serious sexual abuse . That abuse was quite terrible and it made the counselors and helpers running the forum think again about how some people coming to the forum should be aware of the risks of opening up powerful memories and feelings .. They apparently suggested having offline help too for the poster which we have to say seems reasonable.
Two posters who contacted UserWatch anonymously claim that :

"Control and moderation went a bit too far and the poor poster who had opened up was left feeling confused about whether they should talk anymore about their life .

It was as if contrary signals were being given and the result was a growing feeling shared by a few people that the right of free speech was being undermined too . "

"Suddenly one of the admin helpers seems to have flipped and the forum went down overnight into "maintainance mode" but the admin caring forum googlemail address which is seperate from the forum functionally when you try to use it, returns as :
"no longer an email being used "

We think this is apalling . That is not care . People should have been informed about matters responsibly . "


Userwatch has seen many forums come and go and break down or not be supported . The shame of this particular case is it suddenly pulled the plug without care . No warning at all . And the people who contacted us claimed that many posters claimed they had been let down by bad therapists or bad counsellors previously in the UK and US .. Clearly this is not going to help is it ?

What a great shame - Users claimed this forum had some real quality about it ..
.
Posted by PatientGuard at 6:55 AM 24 comments: 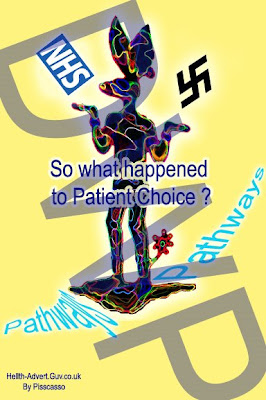 "TRUST ME I AM A PATIENT"

Those of us who saw it coming even back in 2003 saw that Mental Health Trusts were going to become over-managed corporatised merged machines with naff all real patient choice and a serious exploitation of ex patients (the so called User-Voice workers) who were fooled by a well planned DOH and DWP attempt to turn everyone into new mental health workers - that is to say - before they were ever treated to power to hold their own budget and create remedy directly in their lives .. Everything is State Owned under New Labour - its like a form of slow covert fascism in which individualism can barely breathe ..

Its going to get much worse with new rounds of super-corporatisation planned by NHS Trusts and NHS Primary Care Trusts PCT's in a kind of bad corporate orgasm that has more to do with top staff insecurity than local delivery controlled much more by "real" local people as opposed to limited and self important "focus group" approaches ...

But gone is GP-patient axis of potential power and choice .. Its been undermined by Govt and DOH and bureaucrats alike - all at the expense of producing chaos , unaccountability - local disempowerment and : "we'll do what we like anyway " so long as Govt nods that its okay to be policy bureaucratic and have a few groups that look as if we are enfranchising patient's "voices" ...

Well in mental health circles it worked for a few ex-patients who are now busy in the wash of funds and other "recovery" bullshittery that has become the State's overarching attempt to control all life and choices ..

In health, in national policy terms we simply do not believe enough in the power of choice at local and individual levels that create management of conditions and personal empowerment . A few people in mental health circles have managed to obtain Direct Payments to help out their serious disabilities - others have been burned by the system for even trying ..

But the main thrust of "recovery" in mental health is set to fail many because it is top-down nonsense and the supply sides of any recovery and management treatments are dominated by local trusts and others set on "good management" and making surpluses from nowhere really, but patient care ..... The Trusts Board's are self hypnotised by such financial paradoxes which they do not even react to them by declaring madness . No .. Strategic blindness is all in the NHS so long as you retain your job and your status in a bubble ..

The great Pathways to Work experiment is in bubble trouble too and David Freud the ex-banker gambling mastermind behind some of it, as well as Sainsbury's Centre For Mental Health (SCMH) and its other shadowy planners like MIND and Mental Health Media , Rethink are all a bit "up the swannie"... Employment Support Allowance (ESA) the new form of Incapacity State Benefit looks set to be run persecutionally and UserWatch believes the evidence will emerge more and more that its just a part of a bad State that forgot to empower people towards lives properly ...

All the reform money in Mental Health in the UK got soaked up by NIMHE across years (that SCMH planned with the DOH) and later its morphling the Care Services Improvement Partnership (CSIP) who set up localities to create Mental Health Users who could become the "leads" for others to get work ... What in ? Oh well it was NIMHE then CSIP and other halfway zero activities that had nothing to do with Patient Choice and patient budgets and real patient empowerment .. It was bureacracy and meetings after meetings about DOH policy aims dressed up as the "Patient Voice" ready to be rubber stamped ..

£140 Million has been wasted on NIMHE and CSIP .. The planners and social engineering manipulators have been a-swill with money and influence under New Labour ..The people at the bottom , the Users have been without Patient Choice .

Shame about the credit crunch which has seriously farcked up unreal and top-down anti patient planning . But to be honest we saw no working class people leading anything in mental health locally .. We saw only middle class people in dominion, suited for middle class bureacratic games ..

Working class or underclass as it now is - was going to be cured by Pathways to Work ... Harsh rules if necessary . But the speculative banking sector and the frothy jobs are going - it was a dream based on a credit economy that did not generate reality enough ... How could it ? The manufacturing sector was decimated years ago in a major attempt to disinvent the rather blunt nosed working class use of power ..

The ruling elites and classes in the UK also prefer social apartheid and of course bullying claimants off state benefits and state services .. Its a class thing that goes all the way back to semi abandoned hard nosed performers being buggered or half farcked up by boarding school and ex colonial mentality.... They are islands and can cope - why shouldn't everyone else ? ..

Give 'em a jolt of CBT - a poor man's version of therapy ... ECT , CBT ... Somehow the control agenda has never gone away has it ?

Somehow we doubt it - very seriously, and we see that New Labour was partly state-fascism because it could not trust truer empowerment at the base of society . Rather we need to be force fed . And naturally that creates simmering underclass social hatred and divisions.. In the next political chapter, the return of the 19th Century will be hailed as the answer again .. It is not . A new conversation of :

is long overdue and in the UK we doubt it will ever happen . Subtle class dominion and hatred is just part of the UK mind-furniture... It just gets moved about a bit, but the kennel outside is kept the same while the middle class and bankers live off social and financial part service fantasy inventions...

Posted by PatientGuard at 5:31 PM No comments: