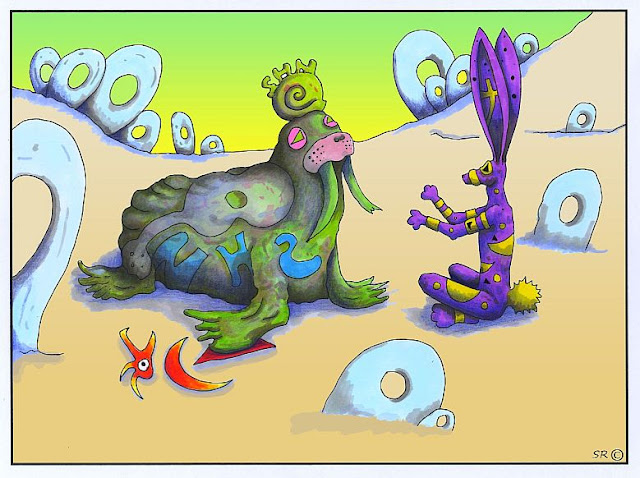 The NHS Green Walrus On Jam Tomorrow Island  by SilvisRivers on Flickr.

"Well" said Purple Bunny of Bunnington-On-Ward - "We all know that NHS Walruses with Snail Hats can certainly sit fatly down upon the re-birth of the Phoenix-ash-Bird . It's a case of big over Ass over Ash  written :

You see,  paying for old rolling-on ways, conflicts with simple things like Patient Choice Wing mechanisms - practical mechanisms where money follows the patient and aids health. You see Oh Walrus,  those resources you take,  create lost opportunities for others, who need the resources to grow their own ways in targeted individual ways.

Of course a patient-choice culture in mental health will never grow or find it's sticks for its crippled feet, so long as it is kept inside it's own crippling fears and co-dependencies with staff in need of long term retirement plans . But of course,  the years of Jam Tomorrow "User Involvement" led this way - with Service Users (patients) given little more than an assimilated voice in the years 1997 - 2010 and a lot of pseudo-representation .

Now its monocultural CBT and charitised "recovery" with dubious provisioners . Here on Jam Tomorrow Island the truth is both felt and seen and blows rue-fully through the Holey-standing-stones. "

"Snail-hatted and slicked with old sea moss and weed
Fat-Sat the walrus denying real birds of captured need
But listener it was to beached tunes and other's deserted strings
So it could turn the sands of Time into bottom sinking things
And therefore sit 'til being bones on lost chance's imprisoned wings .."

.
Posted by PatientGuard at 4:56 AM No comments: