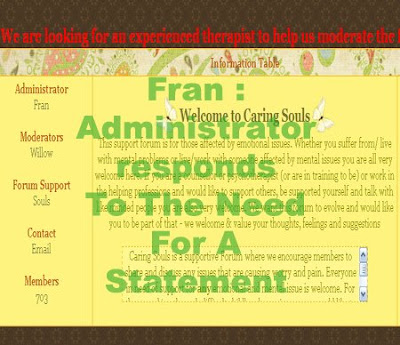 I have only just been made aware of this site and am so relieved i am able to communicate with you all. I am equally as upset and confused as you all are and want to tell you what happened from my seat regarding our forum. It is Souls who started, owned and maintained the forum and i was a moderator there. I am a reliable person who cares deeply for our members and would never close the forum in that way - i did not have any say in what happened nor any control over it as all my moderator tools were taken away while i was working.

I hope you can all hear what i am saying and that this doesn't have to become an attack on myself. I feel as upset as you all do and equally as powerless. Also i cannot and will not be held responsible for the actions of another in this circumstance.

Souls is an intelligent and amazing person but like us all she has problems of her own - and right now they are very serious. I am not going to expose them here but please could you hear that right now she is struggling - I believe she has had a breakdown and is not able to control what is happening to her. She has had something very difficult happen in her personal life recently and was under a lot of stress on the forum too.

It was too much for her and despite her desperately asking to be left alone and my frantic efforts to get her to step back, on Thursday she finally lost it when a member addressed her after she asked to be left alone. I came onto the forum for 10 minutes at lunch time and found a post that showed me she was in a terrible place.

The members who had been challenging her didn't realise the gravity of the situation and it had become inappropriate on her behalf. I removed the post and explained that souls was in a bad place and warned her to back off. That is all i had time for. I then had to go to work. On my return i found the forum closed down - i had access but Souls had removed all my moderator tools and had even closed down our e mail account. I had no warning of this and no time to go in and take e mail addresses so i could contact you all.

My hands were tied and i could do nothing. I have spent the past few days absolutely wretched with the pain of what has happened and the plight of you our members who i care for so much. I am also furious at the way this happebned and at having my tools taken away from me - the tools that could have kept our forum up and running and prevented the pain of us all. I am so glad i have finally found you to explain. I apologise for the closing of the forum. I am afraid i cannot answer any questions as to whether it will be re opened as i have no control over that and Souls is refusing to speak with me. Please understand she cannot help it and would never deliberately hurt anyone - she has become very ill.

I am aware that this has had an acute impact on you all as i know how important the forum is to you. I don't know what else to say - it is an important place to me too and i feel utterly devastated by what has happened.

I am a professional but also, and most importantly, a caring human being and i would never do anything like that to you - i did not have any control over it. I feel angry that my name is now being held in such disrepute when i have not actually done anything wrong. I will not allow myself to be tried and found guilty for something that is not anything to do with me. I am sad and very angry that this has happened - it is very wrong that the forum was shut down so suddenly and i completely disagree with what happened but i also know that it was done from a place of acute pain and a loss of reality.

When the dust settles i will try and see if i can negotiate a re opening of the forum but i am nor sure if i feel able to continue as a moderator there. I would like to be able to hand over to someone else but it all relies on Souls re instating it and i have no say in that right now. It was not meant to become something that took over my life in such a painful and stressful way. I was just a volunteer helping to moderate an online forum but it has become too much for me now. I was asked to come in as moderator by Souls with no idea that she might do something like this.

I am also shocked that you would want to reveal my whereabouts and my name. That feels very unfair - i have a right to anonymity and safety the same as you do Silvis. It actually frightens me to read what you posted here with all those therapists names. It feels like i am being hunted and i feel very afraid of that. I would appreciate it if you could not do that ok and that you would please respect my rights for privacy - as i respect yours.

I am sending you all my love and support. If you would like to e mail me i can be contacted on

Fran you have explained some of the situation here because this matter was not discussable on the Caring Souls Forum which an unstable member of your team closed down and there is no forseeable solution that has been shared or informed to people widely - the pressure for that has occured here on NowPublic.com .. This is a public interest matter with a number of serious angles ..

You are, in fairness to the rest of us , advertised as the main "Administrator" on Caring Souls Forum. The buck stop with you because of that . You have let your name become used in that promotional way . That was your choice ..

Who can know about your informal arrangments behind the scenes - they are not on public display .

In terms of simple principle , in the outside world of service delivery, risk assessments are made of those people who are delivering some kind of resource to help others and maybe you should have taken a longer look at what you were doing in terms of risk and who you were supporting to deliver a resource to others .

In your text response here you've gone from being the publically advertised main "Adminstrator" of Caring Souls to the minimalised "volunteer" .. So lets state this fairly :

"I was just a volunteer helping to moderate an online forum"

Who is supposed to know what your boundaries are when you actually advertise one thing : "Administrator " and state another of more minimal responsibility .. ?

That is fair comment and a fair question here isnt it ?

Online, there are no governing standards for quasi counselling type boards but only mutual ethical stances that we see can seriously collapse leaving hundreds of people adrift from their own material .. We are talking here about very sensitive material ..

It seems that Souls the Forum Support Staff has encountered some kind of breakdown and personal distress but that has spilled over into creating much distress in others and in one case so far that UserWatch picked up, someone reportedly has encountered some suicidal feelings because of it ..

This issue is about safety and people learning that Online they are not necessarily safe because there is no actual accountability . Its clear though from material that existed on Caring Souls Forum that you are a professional and also know Souls on a personal basis so why didnt your professional alarms go off earlier ?

The only impetus there is to put things right in a violated information void where many posters are severed from their own material is a moral one, and the pressure to bring that about lies within principled actions and concern .. That is what has happened here .

"I am also shocked that you would want to reveal my whereabouts and my name. That feels very unfair - i have a right to anonymity and safety the same as you do Silvis."

As a professional counsellor you have to abide by ethical standards - even outside of dealing with clients directly - peer judgement by other counsellors is one of the things that protects standards of safety for clients .

Your involvement with a quasi counselling forum was a moral hazard to your connections with professional counselling . No-one stated you were a professional counsellor but you on Caring Souls Forum , coupled with you being advertised as Main Adminstrator it placed you in a risky position . You were a quality person in my opinion but risks have been run which I feel you might have altered and I hope you will learn from this .. I know I and other have done so dramatically .

You will be aware Of the Health Professions Council in the UK and BACP and others like UKCP who have standards of conduct and complaint processes and if you had been holding a group set of meetings in the UK Offline albeit voluntarily and people's material has been severed from them by a colleague of yours in a set up where you were sharing at least some degree of management authority and implying you were a counsellor then a complaint about ethical standards may well be winging its way to the right committee .

Lets clean this matter up and get people's stuff back or their right to delete their private material Fran - that is the way forward ..

Posted by PatientGuard at 5:27 PM