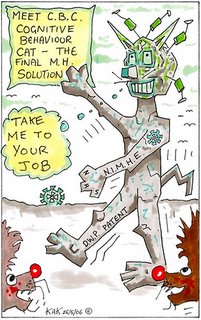 Rumours circulate about there being more therapy supply in Birmingham UK . What is so far the case Userwatch has learned from NHS Board papers is there is a patchy supply across the city.

Strangely enough Userswatch knows they were doing that in 2003-4 and 2005 too. Its also been aware of there only being half a psychologist for use in the north of the city around the impoverished Erdington Highcroft services .

Half a psychologist really means there is one shared between other areas of the city .. This ofcourse was how the triple merged NHS Trust from 2003 managed to balance its books and reduce debt . It simply kept a skeleton service . It had a quarter of of an O.T here or there instead of half or a full one etc .. At least it gives a more anchored meaning to the idea of a fragmented service .......

Some Service Users commented to Userwatch that the NHS Trust kept an intact enough top bureaucracy though and even recalled a "gambling night" revel held in 2004 at the Trust headquarters .

Rumours continue to circulate of there being some Cognitive Behavour Therapy ( CBT ) supply in Birmingham and the Local National Institute Mental Health in England , NIMHE now stationed in Birmingham recently advertised in their "e-letter" the new computerised CCBT for some Service Users to sit down and get their CBT lessons at so they can all get back to work.

No-one has yet said whether empathy-software has been added but Userwatch will report back if it discovers any information . Cognitive Behaviour Therapy claims it locates problems in patterns of thinking that it claims sets up negative patterns of feelings and behaviour.. Its mechanics depend on identifying thought triggers and replacing them with willpower and positive thoughts to avoid any reactivated negative feelings ..

One Service User commented to Userwatch :

"Why can't they do CCPT therapy , yes supplies of Compassionate Caring Patient Therapy would go down well with many of us and its frankly more human "

Posted by PatientGuard at 5:59 PM No comments: 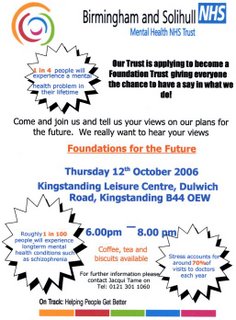 Userwatch has had sent to it a flyer showing that in North Birmingham Kingstanding UK , a consultation meeting has been gained for the locality after some pressure was applied and requests at a recent Council Overview Scrutiny Health Committee meeting were made directly to the Mental Health Trust who were in attendance there

Userswatch learns that some people in Kingstanding will be making the most of this and making sure the information is shared around as best as it can be . Its a short run in though really because the consultation ends on Oct 23rd and so far there has been paltry information surrounding the advantages and disadvantages of Foundation Trust status for the public to digest ..

Already Dept Of Health estimates show that 85% of patients can be captured in some statistical methods which in turn will be used to control budgets allocated to the new Mental Health FT Trusts.

The stats are based on predictions on how to spend money based on current patterns of spends, yet this is flawed already some Users claim , because some conditions are not at all well catered for and are quite serious though left out of the treament cores which have increasingly become medical model orientated with little option for other types of conditions which are socially caused .

Its clear to Userwatch some conditions are not being catered for and involve high levels of psychic pain and the need for deep therapeutic intervention . Even those conditions on the medical model side cannot get enough "talking therapy" intervention which offers extra ways to navigate and build trust in dealing with emotional pain and the "internal world" of affect as well as how the present day world might collide into that for them

It is estimated by the DoH that 15% of patients cannot be captured properly within its new 13 clusters of predictive typing designed for Mental Health Foundation Trusts leading to a "payment by results" table of patient-types who fall within it - and therefore the others who do not .

So the question needs to be asked :

Are there any advantages to Foundation Trusts in Mental Health .. ? We can say immediately - not for the 15% it appears ..

Posted by PatientGuard at 10:53 AM No comments:

How Were Surrey Service Users Seen? Any Lessons For Birmingham? 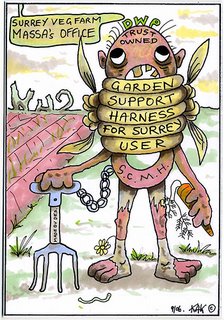 Just how were the Surrey Service Users seen at the Garden Centre in Surrey which had £3 a day taken away from them in June 2006 only to have it promised for potential re-instatement (Sept 28th 2006 ) by the CEO of Surrey & Borders Partnerships Trust Fiona Edwards ?

Its clear that the Surrey Justice Blog :

Uncovered that there was a thrust to "externalise" services and to do so intially by denying dependent patients the £3 a day .

The original story by Joan Mulcaster (Trinity Mirror) claimed that the garden work would then be done by the patients for nothing ..

This is reminiscient of some kind of slavery some might argue .


What's also intriguing is the CEO's of Trust's happen to know each other often - so UserWatch hears on the grapevine. They clearly enjoy their lives of socially aranging others "treatment" fates .. So in Birmingham Userwatch wonders are there any lessons to be learned from Surrey ?


Have Users had monies taken away from them ? Have any suffered a real loss in monetary terms ? That's a position that needs looking into . UserWatch will report back with any news on that front when it comes in ...
Posted by PatientGuard at 3:48 PM 1 comment:

The Death Of Day Services ? 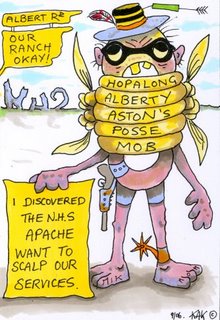 Userwatch has had material sent to it by a concerned pary regarding one Mental Health Day Centre in Birmingham UK known as the Albert Rd Day Centre in Aston. The Day Centre caters for those with severe and enduring mental health issues.


Apparently some changes appear to have already taken place which have affected Service Users there .

A two page announcement dated Sept. 13th 2006 was placed upon the Day Centre wall. It claimed in its opening lines that (the Centre) :


It was signed off by a member of staff .

Further on in the statement it claims that the Centre will only be open for two days a week "Monday and Thursday" as from October .

The document appears not so much a lawful consultation as one might expect , but an announcement of a set of activities that are going to happen and everyone will have to fall in and comply . Much of the announcement deals with ideas to "socially include" folk into community activities and the potential to join community groups . What seems to be the strong impression though is that that there has not been a fully joined up consultation with the service users at Albert Rd Day Centre ..

In this regard Userwatch knows of further material dated 18th Sept 2006 , sent to Birmingham City Council to Catherine Underwood of the Social Care Services and Peter Davidson who heads the mental health services , which queries them as to whether a proper consultation has been done .

There does appear to be some evidence of changes taking place at Albert Rd Day Centre for people with severe and enduring mental illnesses without a full consultation happening . There is a two page announcement from Jane Thakoordin (who works there) who in that document of Sept 13th 2006 announces :

And then she goes on to outline changes which involve less access to the Day Centre. Can you clarify the position fully please and explain what consultations you have done with Service Users & public affected nearby ? "

This is not the only alleged pattern of changes of mental health Day Centres across Birmingham which appears to have less than fully open patient & public consultations which should be announced to all concerned under Sect. 11 of the Health and Social Care Act 2001 . In fact it appears to be something of a habit of the services one Birmingham Service User claims who contacted UserWatch

There is another Centre named the Hawksley Day Centre in Birmingham where the patients have been "mainstreamed" and helped to become "socially Included" using library facilities , and there are claims that some are using nearby colleges . Audits for how effective these things are however seem to be thin on the ground. Some keen eyed Service Users feel the flurry of "social inclusion" activity will in fact strain some Service Users and are hoping more sobriety comes to the mental health "social inclusion" services ...

Others are asking : Where are the Day Centre services going ? Will any Centres be left in a couple of years ?

Posted by PatientGuard at 3:27 PM No comments:

A Question Of Independence . 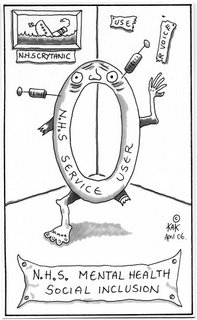 The petition In Birmingham UK. for an Independent User Voice mechanism as well as for a "Patient Constituency" stands at about 75 so far .

Members of the public have been engaged in the issue because its the services they pay for too.

Mental Health issues though do not often reach the public consciousness although that appears to go along with a lot of disengagement on many issues - until it hits people individually .

But quite why the "User Voice" mechanism who are now mainly paid staff in the Birmingham & Solihull Mental Health Trust are running a "consultation" on September 25th 2006 for Service Users with reference to the Trusts bid for Foundation Status appears to be fraught with a certain paradox .

The Trust have not optioned a "Patient Constituency". Whether or not the "User Voice" mechanism which is paid for by them will even mention this specific matter remains to be seen . "UserWatch" will report back for your interest .

You might have thought that long term patients of the Mental Health Trust with cyclical problems over years would have especially been contacted with regard to the option of a "Patient Constituency" for their expertise on "Bi-polar" or "Psychotic" patterns of distress and tidal recovery and crisis . They were not however as a policy of individualising contact as far as UserWatch can ascertain . Equally there are some patient's UserWatch has had contact with dangling with hardly any services who have been disordered by the pain of their backgrounds .

Its another group that do not appear have not been engaged in any realisitic way ...

Posted by PatientGuard at 11:34 AM No comments: