There's little doubt after having read hundreds of comments of many ex Flickr Users on the recently deleted forum thread of nearly 30,000 comments (see below) that many Users had not been forewarned at all about the Flickr "Shockr" User interface and format changes . This would have given Users  a reasonable time for adjustments, or to export their work, records , family photo's etc somewhere  or otherwise back to their computers or other devices.

Flickr staff closed down the "Help" forum thread which became reputationally dangerous for more of the internet-"press" to see,  when many of them anyway  were mostly standing on the Yahoo-fence and were simply being on-message in the media community where favours are done by not reporting the ground based User-experienced facts .  Well that is,  until the bottom-up Users bite back 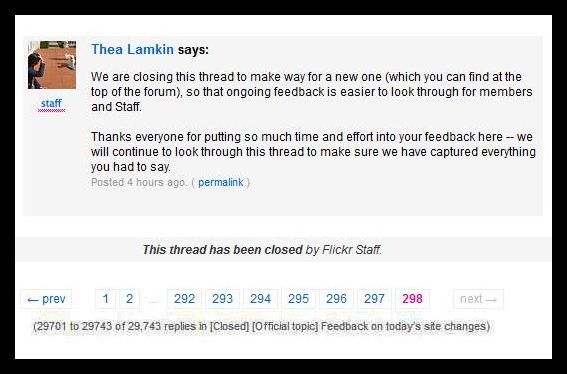 Yet for all the deletion of the "Help" forum comments,  and now a replacement thread,  there's still been a large amount of Flickr Users throwing the towel in : 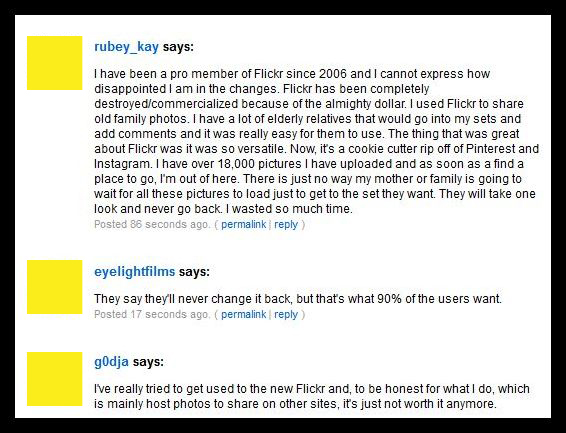 It's not just one Flickr User,  as above,  with a lot images to re-adjust storage for,  it's others with the same problem who have gone to ipernity.com which frankly offers more functionality than the good old Flickr did ..It offers music upolad , document upload and film upload,  as well as image upload.

There is a group : New Flickr Survivors with over 800 in it

It's worth a look for those who like developing online community inside relaxed white space rather than the frenetic tumbles of images that Flickr.com has now become . Not that the new format does not suit some people. Apparently some like it . Fair enough.

Flickr.com changes have been  a loss though and a no-win situation for many Flickr Users . Many did try to voice reasonable points but they were ignored by Flickr's Community Management Staff for days.  Many were accused of being "whingers or whiners" by some of the perverser Flickr pro-change members.  That has been echoed in other quarters by pro-yahoo bloggers who need to show that somehow ordinary folk who "whine"  are lesser-subcultures ....

This was just another injury to wounds,  symptomatic of badly managed change that happened without warnings for Flickr User's  personal adjustments .

Flickr-staff now are showing they hear people rather than being invisible .  Its very late "good practice" but maybe late is better than never ..In the new Forum with over 2000 Users mostly negative comments there is finally some better Flickr Staff communication . 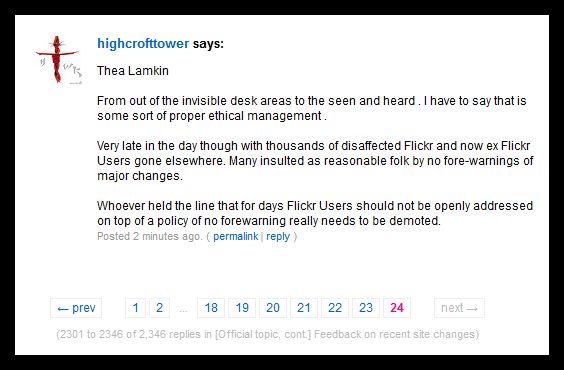 Posted by PatientGuard at 1:13 PM No comments: 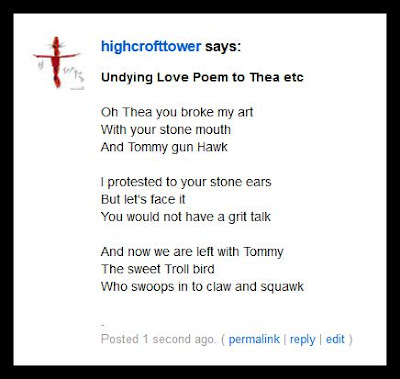 With the Thor's hammered alterations at the Yahoo US Flickr photo and image storing site still underway and the majority of (vocal) users there unhappy,  with many apparently gone or stunned into photo-store imprisonments, or some waiting still for deeper compromises,  there are light moments on the forum cliffs where the various birds scream at the Flickr hawks. They have good cause - investing as they have done in creating niches over years which have been spoiled by shocking black swoops of advertising-eagles searching for revenue nests they can exploit.

Thea Lamkin (Flickr communication staff heading the "Help Forum" messages) who claimed in her twitter post of 21st May that she is an "iiiiiiisland" in one of her latest twitter posts  is a communicator purely of the on-message new Yahoo-Flickr stance that no great changes backwards to a prefered "classic view"   will happen but essentially Flickr will tweek and squeak about etc.

Does she want to throw it in ?

Nah.... It's just getting slightly warmer in the San Francisco area which features Alcatraz and is famous for the Bird man who liked tweeters too   . There are rumours though that Flickr may put it's servers there because of threats about  Terror biting Flickr Users . Userwatch is keeping contact with Homeland Security and is alerting them to too many free Terror biters being about

Posted by PatientGuard at 4:40 AM No comments: 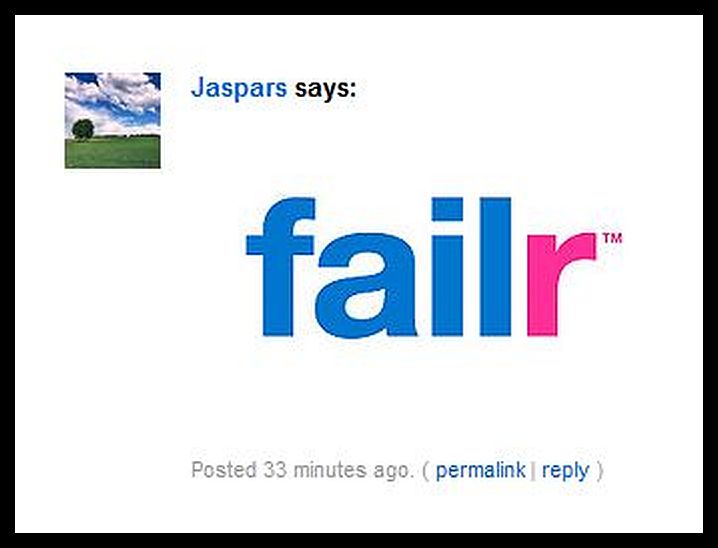 No apologies from Marissa Mayer for no full consultation on Flickr image-site changes.

It just gets sadder and sadder on Flickr as no-one from Yahoo accounts properly to the vast majority of User posts (over 25000 now) to state there will be no final compromise with many of the paying Flickr Pro users. Compromise solutions have been put forwards for Flickr staff  (Yahoo) to consider such as having both  Flickr versions: "classic"  (plenty of white space to aid focus)  and "new"  (scrolling joined up boxes together) but someone is not for budging at all .

Userwatch thinks it might have helped if Flickr-Yahoo had spelt out their business plan (to corral more ad revenue)  and future view of where Flickr was going and why it was so necessary for Flickr to change - yet users were shortchanged on that  inclusive, informing way, to create better toleration of change .

The black shock of sudden change taking control of all Flickr User's images, the way they are shown and the dissent, is not stopping .

Posted by PatientGuard at 1:00 PM No comments:

UserWatch had a unique insight into Yahoo's CEO and the stressful job of turning flickr photo-storers  into little woolly Yahoo advertsing sheep using their bleeting photographs encoded warmly to look for more mobile sheep looking for bits of incidental ad-grass to bite on or get hooked by. Hungry little devils !

In the mass manipulation trade of sheep Adology it is known a virtuous eco-circle equation of hungry big corporo-wolves hanging around tasty little site-sheepies . The wolves are known as the Terrorbytes to those in the Adological jaw dripping and clawing circles .

Yet you have to have whimpathy for the CEO and her issue that she does not like the fact that "Flickr" sort of rythmes with "Marissr" and may change the site name to FUMBLR... It has become an irritating almost synonym-like relationship of late,  but let's face it stress is good for you and pulled out hair can be transplanted again on the pay of a CEO ...

UW
Posted by PatientGuard at 6:10 PM No comments:

All quiet on the Mayr front : How about an apology to tens of thousands of complaining Flickr users ? @marissamayer @techcrunch
— Art De Rivers (@ArtDeRivers) May 24, 2013


It was a great photo-store site with suitable "negative space" or "white space" which created a sense of focus on a picture or arts  and it was not interfered with,  too much,  by ad-hungry Yahoo who took it over in 2005. It was in profit too and probably still earns revenue. Yet Marissa Mayer CEO of Yahoo is on a mission and that mission is to conquer the new Mobile Planet with armies of used people, or rather their stored images with an advertising banner underneath and the big pull of a free terrabyte of image storage as long as your images and you can be used to sell ad space..

Somehow "terrabyte" starts to sound like "terrorbite" and maybe the evolving world is one where slowly the populace get bitten by the feelings they are being watched and watched and watched by secret little ad-bots sneaking into your every digital space ... Roll on the privacy reactions and more boundaries . It will happen.  The net has been colonised by the silicon aces of quiet manipulations - flying under the radar of your senses and  sites and innocent actions to just network.. Yahoo and Facebook and even Google are turning the net into a closed experience all pointing towards them and the ad-maggots... Lords of the Flies are dominating the web ... All you have left is your best spit - use it on the web and keep the web as sane as it can be,  given that we are all crazed anyway.

UW
Posted by PatientGuard at 1:59 PM No comments: