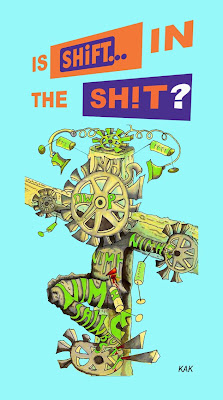 SHIFT with its anti-stigma in mental health policy thrusts - was created by the Dept Of Health (UK) and the National Institute For Mental Health in England .
Who created NIMHE ? - It appears the DOH and Sainsbury's Centre For Mental Health (SCMH) did since SCMH registered the NIMHE website itself in 2001 .. It is strange that a national Charity like SCMH should be doing that for the Dept of Health isnt it ? Its never been answered why that happened . (CLICK ON IMAGE TO ENLARGE) 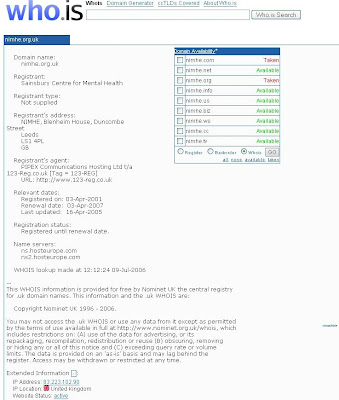 Its also likely that people close to ex Prime Minister Tony Blair and his love of all things american (NIMH - in the U.S.) helped the UK version of NIMHE into existence ..

SHIFT which came later (2005 - 6 ) though was just part of set of ideas that was guided by a mental health "anti-stigma" policy thrust to get people back to work who were suffering mental health problems .. The anti stigma thrust SHIFT was to follow, was formulated by several mental health charities : Mind, Rethink, Mental Health Foundation, and it was hinged into an economic model that placed a priority on getting mental health Users (MH Users) back into work .

The MH charities in the UK and the big engine of them all SCMH , set about trying to convince society that society itself was a serious problem in stigma terms to MH Users gaining work and yet for years they deliberately missed the discriminative way MH Users were not given equivalence of Patient Choice of some treatments, or consultants or hospitals that the general populace were given in other areas of medicine and care .

Patient Choice of treatment etc , and real empowerment like that was not their real priority.

Funding and growth was and that was not going to be a problem with a Government eager to hear their combined voices of advice of how to set up mental health Users to get them back to work .

Pretty soon in 2006 and 2007 both Rethink and Mind had their own Day Centres re-oriented to work and task based regimes for Users . At UserWatch we heard about it all . Patient Choice with its real degree of self determination was subsumed under ideas of Patient's having a voice but not one that was going to create serious choices otherwise maybe many within its empowered direction would have walked away from the mental health charity day centres too .

"Anti-Stigma" was thus skewed towards work and disability discrimination for purposes of saving Govt from paying out Incapacity Benefits (IB) - and we would argue perpetuating the charities interests alongside creating the new bureacractic job creation NIMHE, which from 2004 - 9 cost over £100 million .

Embedded in anti-stigma ideas in mental health was an idea that work was the priority part of the new "recovery model" alongside "social inclusion" . It was a hook that sounds good until you leave the part out of Patient Choice and its crucial role in empowering recovery .

What patients really wanted we at UserWatch argue, was subsumed in a drive to herd them into meetings in Trusts and with NIMHE, to get them moving in the right direction across a few years .. Brand them with new optimistic ideas about User-Movements and Experts by Experience .. Very few obtained any real Patient Choice though ... Many had no therapy and real recovery treatment they could genuinely shape outside of monopolistic NHS Trusts busily saving money and creating the impetus for making future "surpluses"

We know of MH Users burned out by it all across the country . Some were tempted into the new organisations like NIMHE and its Users In Partnership or the Patient and Public Involvement Forums .. Most were burned out or disillusioned by it all... UIP's still exist, but are basically directionless groups.

In an economy on the up, this work driven anti stigma recovery model across 2004 - 9 seemed almost hypnotically possible and Tony Blairs influential policy statements of making the workless class (40% of which were mental health recipients of Incapacity Benefits ) work again in a something for something society took shape in David Freuds privatised mechanisms to get people off IB and into work while private firms made profits from it .. All has gone awry now .. The big credit rivers have dried up .... All SHIFT can do is shift dust gathering around it perhaps ?

Will SHIFT survive the recession ? Probably in some form or another ... Because the MH Charities and the UK Govt all think dominion ideas like their work driven ideas and the new Employment Support Allowances (in place of Incapacity Benefit) and "work is recovery" really are the answers .

We think a real Patient Choice culture with training allowances (to train where people can choose) and recovery budgets Patients can control are a better answer. We also think the Govt and society has to tolerate people of different mindedness who may never be able to be fully functional but who may be able to contribute here and there ... The mental health charities too should try tolerating that instead of being modernised workhouse masters .. Their career self interest though and Govt funding connections through the back doors l;ike the lottery will be uppermost to them ..

We doubt any serious reform will happen. Images will be spun, Trusts will make surpluses from patient care , and lives and opportunities will be lost all over again ... Why ? Self interest at the charity level and bureacratic level , and spending priorities from Govt will never enfranchise MH Users fully .. In the UK its just a fact of life .

Posted by PatientGuard at 7:19 PM