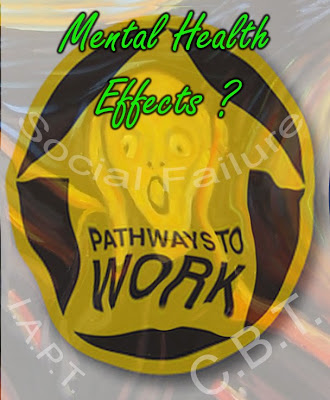 Could Patient Choice In Mental Health Have Provided Better Results ?
After the Audit Commission gave the thumbs down for "Pathways To Work", the grand re-employment scheme backed by Labour and by Sainsbury's Centre For Mental Health , it found on the end of its thumb a great plumb pudding pie worth £798 million to various providers of schemes to get the disabled back into work ... Many a silver sixpence was enjoyed by the contracted providers helped along by the now Lord David Freud's ideas of get 'em back to work and use projections of their future state benefits to pay for the providers doing that .....

The scheme managed to get 125,000 back into work but it looks as if these were people that were far easier to deal with . These are often called the creamed clientele whilst others like those disabled by mental health conditions remain parked. Well its always the case it seems, but surely there has got to be another way to allow disabled people with mental health and minded-differences to contribute socially without hounding them as the UK systems do .. Or shall we believe magically that everyone should be the same ?

Linked to Pathways has been the almost singularly favoured Cognitive Behaviour Therapy roll outs in the UK that have seen only small gains for some few patients and claims that at best it is only 18% effective after publication bias . Pathways was a thought out policy though with "Condition Management" as part of its thinking tools as well as being embedded within the aims of the national roll out of IAPT - Improving Access To Psychological Therapies . Yet truthfully it was a scheme that could only flourish in a booming economy with frothy service sarsaparilla jobs to spare but while the curious UK policy of invitations to EU job migrants continued too , it was hard to see the disabled being able to compete with fitter migrants .....

In mental health could Patient Choice of more therapies (using the market sooner as opposed to NHS and prefered one size fit provision) have helped people back to work ? Well it is debatable but somehow the figures for Incapacity Benefit of 2.6 million being on them and a large per cent being in mental ill health are shouting something very loud indeed and that is the system is a grinding cul de sac of poor provision with poor health choices to get people back into productive activity .

Over 30 years of both Thatcherism and Blairism with little attention given to the productive industrial sector as a growth anchor, now sees many UK people are just knackered out both by age , being ex-working class and non adaptive to "aspirational class aims" , while living inside an almost self hating UK system that forgot they should have been a priority to heal...

Cheap goods comes first though . Everyone is collusive in that and therefore the UK's own self contradictions comes back to haunt . Healing the unhealed better is a serious matter because it requires balance and empathic interest inside one's own immediate community . It requires choices too, fitted around disabled pace and mostly that idea of choice in mental health was burned out and changed to state ash under the Labour Gov't .

Over to you David Cameron and Nick Clegg can you do better ?

.
Posted by PatientGuard at 3:40 PM No comments: