The UK Dept of Health put out bulletin on 29th December based on moving the Govt "HealthWatch" policy forwards and woven into it is a 2008 - 9 UK wide Local Involvement Networks report that shows in some parts of the UK "LINks" as it called (lay monitoring and public and patient health engagements) supported by a DOH grant to Local Authorities did kind of , half-okay.

The great missing equation 1997 - 2010 in Labour's regime in health from the mental health UserWatch position was legal and equal rights to Patient Choice hidden away even as it now inside the strangulation of "secondary care regulations" that basically bars mental health patient choices whilst the DOH was busy making sure with the likes of the (Sainsbury's) Centre For Mental Health "stabilised" psychotics were given "choices" through the Direct Payment methods of eligibility for part service choice techniques, that dot Local Authority (LA) Social Care Services here and there in the UK, uneasily waiting for the recession promoted news of possible eligibility re-bandings.......

Seasoned UserWatchers in mental health, knew this LA Social Care "DP" Direct Payment method was not "real" Patient Choice in mental health but a skewered slimmed down rationed version of it that bought of a few well deserving Users, but rejected the rest as "Socially Include-able" and readied them up for the UK cannibal welfare stews because the unproductive classes in the UK cannot sell anything abroad very well and need to trade of the bones of any part of the welfare classes . Maybe you have not noticed. China has, but the fact it has all the jobs makes it shrug its large national shoulders .

Ahhh Cannibalism, with a bit of peppered press hate thrown in ...So UK ...

Don't get us wrong we applaud volunteers trying to make things better in Healthcare but the slip and slide of Govt's is not going to stop and in the great seas of acid and greasy social compromise , volunteers will simply be used up, and in terms of LINks evolving to HealthWatch we are not so sure the Local Authorities are the best place to hand over the HealthWatch budgets to , since they are both service providers and now the likely money keepers over the HealthWatch volunteers who may monitor them ... It appears the LA's will performance review too the very people monitoring them .. What bollox that is ..

Yeah all this right at time when the social shit of the under-performing bureau middle classes who exported very little but debt, is bailed out by everyone and the new class shifting sands has not yet resulted in a serious export led creative new basis and the net displacements of paying off the debts means the LA's have to cut services ... Oh dear, the temptation to gag monitors is going to be very high.

What it all means in HealthWatching terms is likely poor performance, or ritualistic performance , and a lack of cash we'll bet, to be given to the new HealthWatcher volunteers functions.

Accountability is a serious matter but it is not taken seriously by parts of Govt and some of their bureaucracies who see out-maneovering it, as simply part of their skill set tacitally nodded to by the politicians .

"Healthwatch will usher in a new generation of patient champions with the resources and powers to support the needs of their local communities. I hope this report will act as a call to action for members of the public and LINks volunteers to lead the way in this reform and to become the first Healthwatch Pathfinders in England."

Watch out Volunteers for the new Local Authority master and slave trails inside HealthWatch .....

UW
Posted by PatientGuard at 4:57 PM No comments:

Cheers For The Warning HSJ Mogger

Its true they announced it !!!

People could permanently damage their eyesight and even risk blindness if they look directly at the moon passing between the sun and the earth between approximately 8.00am and 9.30am on 4 January 2011, the Government's Interim Chief Medical Officer Dame Sally Davies warned today.

Actually at UserWatch we are speculating that the all powerful DOH Sun Department has deliberately arranged the DOH-tal eclipse as a way of saying they are still in charge of the Universe etc ....

UW
Posted by PatientGuard at 8:38 AM No comments:

Arts By ADR
HSJ Mogger keeps his head down whilst the Local Authority unleashed HealthWatch hawk attack swoops - what can we make of it all Mr Lansley , Little Weed and Bill and Ben ?

Simply put there is a growing suspicion that far from locality power really taking off in health in terms of lay people volunteering and watching what happens and whether patients get a good deal the weakened Local Involvement Networks (LINks) (weakened initially by Labour) will fall victim to Local Authority hawkishness and dominion . Watch out for the influence of Social Care arena's in the UK for they give rise to many green skinned mutant staff who fell into radioactive management pools ..

We hear the true conversations amongst UK health activists and that's the worry being voiced. Contamination by Local Authority . The strange paradox a-wing though is, why is it that UK activists are so conformist and wait for a lead from others ..... Its not rocket science to watch and ask for information and raise concerns with parts of the public, and others interested in getting a good deal for patients - so why the strange icing up of democratic soul in health activism that we have been hearing about ?

Is there a Healthberg in the UK waiting to melt and flush activities all around ? . When will democracy thaw?
UW

.
Posted by PatientGuard at 3:42 PM No comments:

The Rivers art lot of multiple cheekonalities have been at it again .... It appears on the icy horizon that new ice sculptures have been crafted and the NHS slave staffies are in wobble and slip mode as the whip winds of frozen pay (in return for no compulsory redundancies) get closer and closer ..

How will it affect Service Users ? Longer waiting times , concealed "waiting lists" and anything to look efficient while misery increases ..

Now maybe the Bankers need ckuffinwell burning or at least nitrogen-freezing with being chilled out on all bonuses for years ......

Still , take a good look at what we did nationally for 30 years - denuded export capacity , gave way to middle class illusions of admin work for all , or pushing supermarket trolleys. We social engineered social engineers of everyone who socially engineered everyone else - supported head-ucation head-ucation - head-ucation and became UK-unreal and made ckuf all for others to purchase that would earn our way in the world .

Germany in the EU actually preserved its industrial base though while we, riddled with old hate for the mucky busted up basic dog (now welfare) classes, start to cannibalise their disabled futures .....

Who should get back to export led real-work ? The middle classes and their expanded Blair aspirers .

.
Posted by PatientGuard at 9:33 AM No comments:

Some Local Involvement Networks (LINks) in the UK have evolved to do some partly useful monitoring of patient services while others have danced about and posed daintily .....Okay Daintily is what many have done with pinky sugars on too . Sugar coated monitoring has occurred and it only means too much of the NHS service has waltzed about with shitty knickers on which were not bum wiped ....Maybe HealthWatch will have bigger magnifying glasses - LINKs telescopes appears to have been quite weak and too distantly positioned .....

Daintily is useful though, for sneaky L.A. Vikings who realise a quick swipe here and there means disposing of muscle and putting onto a sharpened stick the scalp and talking heads that might be left over ... Beware the L.A. vikings they are a-sailing and want a ritualistic life made from lappy and lippy dancing ... 1066 is sort of back and we are in for a yawning change .

UW
Posted by PatientGuard at 1:43 PM No comments:

Yeah it figures .... Health Watch is just code for the reverse ... Luckily Mogger is on the trail of Inside Outery and used to know RD Llaing's cat too named "De-mystification x 10".......
.
Posted by PatientGuard at 3:56 PM No comments: 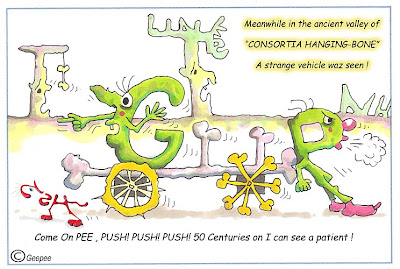 Have you got the picture ? Okay who is the bone ?

.
Posted by PatientGuard at 6:17 AM No comments: