Mental Health Arts The Pope's Spider And Oh-Jesus The Butterfly

.
Posted by PatientGuard at 9:34 AM No comments: 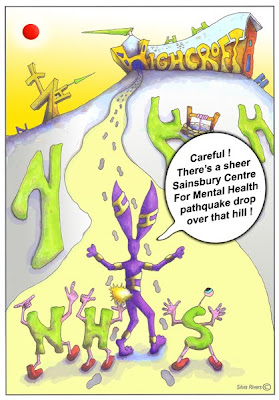 Sainsbury Centre For Mental Health
PathQuakes Over The Highcroft Hill

Oh dear , Purple Bunny and the NHS-Betics above have discovered a terrible Sainsbury Centre For Mental Health Pathquake over the hill .......Oh dear ... Strangely enough this was discovered at the same time as the Commons Public Account Committee noted that the Prime Providers of : "Pathways To Work" (strongly influenced by SCMH and Dr Bob Grove who worked for SCMH ) had pretty much blown £760 Million and actually done worse than the Jobcentres !! .

Mental Health Users for whom Pathways To Work was also designed, were hardly helped at all and often "parked" . Why ? Because most were not fit enough anyway and demanded a lot of support that was often impractical in an economy that simply does not fit to magical thinking but certainly creates a lot of socially unsupported sinking ..

Many Mental Health Users were caught inside Labours 10 years of ideology paradoxes . There was no legal Patient Choice mechanisms added to special training help at an in-reach level. In other words training was instead "mainstreamed" (and unsuitable) rather than piloted in special ways inside the NHS contexts to help long term vulnerability . Who for instance could now learn how to operate digital skills online or offline since Trusts dumbed down on everything and overcontrolled everything or pushed it out via "social inclusion" ethos ... Gone was safe sanctuary, and the concept of aided growth inside a mental health community of vulnerability ....Oh apart from User-involvement which partly spawned a divisive class of elites that often sold their fellows out ...

SCMH and others just pushed anti-asylum ethos and pro "social inclusion" ethos in a real world struggling to create real work for many others who were fitter anyway ...

Therefore in mental health, economic context, and suitability for adaptation to real work was ignored by the planners and thinkers and NHS civil servants . Savings though were searched for in Day Services . They still are being targeted across the country and in Birmingham so we hear (tell us more) . The "elephant in the room" were the paradoxes of left wing and prayer over real care .. The paradoxes of no real work , no inreach training where it counts - inside the mental health community where personal growth might have been more possible to adapt people into launch capability - but of course Labour made sure no legal rights of Patient Choice existed either .... Users were bureau-job-fodder.

" A flagship £760m programme to reduce the number of people on incapacity benefits only had "limited effect" and was not well implemented says a critical report published today.

The Pathways to Work programme contracted work to private providers who "seriously underperformed" and had lower success rates than Jobcentre Plus, the Commons Public Accounts Committee found. Between 2005 and 2009 the number of people on incapacity benefits reduced by just 125,000 and the committee said it could not be clear how many of these were due to the Pathways project."

Posted by PatientGuard at 5:02 PM No comments: