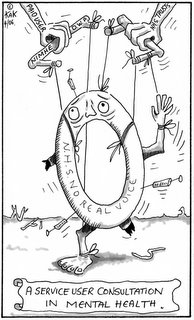 What we have in the shape of Birmingham & Solihull Mental Health Trust is a public service that has far too much power over the "Patient's Voice" - prefering to create mechanisms that some Users of services believe are ritualistic in the "representation of voice" and are just not independent enough ..

There are concerns that the orginal voluntary "User Voice" organisation of some years ago based more in the south side of Birmingham has by 2006 become an in house NHS organisation and is subject to the power axis and convenience-management ambitions of the Trust. Many of the folk who comprise this organisation "User Voice" have had some experience of being a User of services , yet its managment committee is supported by the Trust to the tune of a few thousand pounds a year . It is not independent .

The more executive arm of this "User Voice" body are now NHS staff paid for by the Birmingham & Solihull Mental Health Trust. At least one User was paid in excess of £25k in 2005 .

There are approximately 11 "User Voice" staff now - some are part timers but the budget must be pretty big .

Service User resistance to a "managed voice" is beginning to take shape though now to this body which really has to become fully independent . There is certainly a model in the shape of Derbyshire Voice which has attracted some Service User attention in Birmingham as an alternative which has a more independent take and is not financed by its local Trust but by other bodies at an arms length and it is supported by nearly 400 members ..

Its clear though there has to be more safeguards in Birmingham such as a constitutionalised basis for membership , proper AGM's and meetings to democratically shape policy and practice with the services . There has to be real accountability to User members, it is a must in the new arena of Service Users having realistic voices that actually mean something and are not over-mediated by NHS Trust managment..

In Birmingham a petition has started that wants to create proper representation for patients and their voices that the mental health NHS bureacracy cannot easily compromise . The same petition thrust is spurred by the Trust's attempts to ignore the creation of a "Patient Constituency" alongside the "Public and Staff Constituencies" which the Trust want to create in its latest bid for Foundation Status .

For too long it is claimed by some Users the local mental health NHS bureaucracy has been too much in charge of "Patient Voices" , direct costs of User Involvement , and employing groups like "User Voice" instead of encouraging independence and all this also creates a justifiable area of criticism about the use of front line money for treatments . The issues have also created a divisive air of Users promoted by implication as notionally representing others whilst being accused of being inside a conflict of loyalty position by being paid by the NHS Trust .

Some Users in Birmingham are claiming directly : "You cannot work for the services as Users and properly represent other Users robustly while being in the pay of the Trust "


More recently the Bham & Solihull Mental Health Trust were guilty of sidelining an Independent Patient & Public Involvement (PPI) Forum Dec 2004 report , which recommended in early 2005 that the patient's (own) voices were recorded as to their satisfaction over changed services at a day centre "Tall Trees" which a PPI report showed had a comprehensive well tailored approach.

The day centre "Tall Trees" had been the subject of a lot of intense attention . In 2003 it had been part of a patient involvement study done by a independent team named "SURESEARCH".

It had been an unusual result that all Service Users were unanimously supportive like that.

....Later in April , May and June 2004 when services changes were on the agenda , those same patients reported confusion to a PPI member and wanted to know what the results were of the "SURESEARCH" study . The Trust "forgot" the study apparently , or rather never lubricated it into fuller existence . Was this a waste of £15000 ?

Service Users have a right to claim that .

The patient-audit though of their voices after service changes at "Tall Trees" which the seperate PPI Dec 2004 report required , never happened . Instead by June 2006 , a staff view of patients was entered in the record under pressure .

It was not adequate and did not conform to the PPI Dec 2004 requirements of direct evidence of the "patient voice " and that much was supported by Dr Lynne Jones the Joint Chair to the All Party Mental Health Sub Committee. She claimed the requirements of the PPI report were simple good practice . It was also discovered in 2006 the Dec 2004 report was not seen or shared with the Chief Executive Sue Turner or even the Chair of the Board . That is still under investigation .

The Chair Jon Shapiro and Sue Turner were both reportedly surprised when a PPI member gave them a copy of the original report in May 2006 which they should have received in Dec 2005 - Feb 2005 .

On the face of it over time there is a NHS Trust in Birmingham that appears at some levels to neatly package the "Users Real Voices" and even make them partly vanish ...

Posted by PatientGuard at 8:16 AM 2 comments: