.
Posted by PatientGuard at 3:54 PM No comments:

Mental Health : The Rise Of The Service Payers? 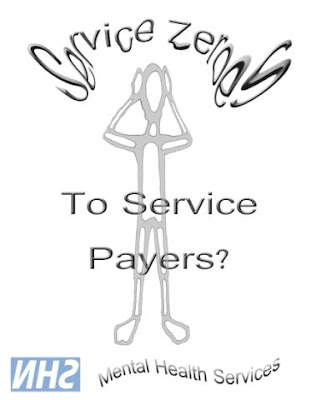 Yet the formal truth is (as opposed to the politically correct long colonic cleaning journey of User-involvement) is they are first and foremost : "Service Payers" - who would have thought that?

Then rethink it perhaps ..Its true, and at least suggests another kind of balance of "patient-power" .. Where it goes from there though gets difficult .

Restoring the relationship (and proper balance of power) of accountability on public services to those who pay for them has to be based on who is in charge of needing to see how paid for services operate effectively or otherwise ....All "Service Payers" should be able to see detailed costs . Audits are normal for any form of business or organisation - unless they need hidden "slop-pery" and depend upon a lack of critical vision into them, and perhaps always can depend on an endless political pot of money .

"Partnership" is not possible with mental health services in a political context where everyone is supposed to be part of the State - this is sloppy nothingness, fantasy manipulation , and leads to fudgery and elite "Users" groups that pretend to be the User-Voice , locally and even nationally ....

"Service Payer" as a proper set of terms is based on implied immediacy of effect , strongly implied boundaries of being able to hold services to fuller account because you pay for them . And, to hold them to account with a real degree of proper independence and right to critically examine . The right to critically examine is easy to uphold - publish outcome measurement and accounts , and minutes of all committees barring patient information, and do it transparently - this is the age of the internet - but it has seen more methods of secret and closed governance within the NHS ..

Real patient choice should follow being a "Service Payer" too .. Try experiencing any of that with NHS public services in mental health . Its an uphill job ..But being able to have outcomes and costs also made transparent is, to repeat, a simple "Service Payer" right too.

Mental Health Users - patients etc , are actually all taxpayers (Service Payers) for public services . All of us ...Even long term mental health "Users" and even if they should be on benefits since they pay V.A.T. and other related taxes which are not hypothecated. So its for sure that they too pay within the tax take for mental health services ...

In 2010 and further on some can see this position and terms of "Service Payer" being re-invented in the political and social future because the last 10 years has seen little than a more selective and elite "Mental Health Userati" in the U.K. highjacking the planning and policy levels of mental health, and the grant cycles of the lottery, together with the mental health charities who have skewed their campaigning vision towards work related outcomes for mental health and not directly at Patient Choice ..

"Trust me I am a patient" did not happen in mental health - it was selectively tampered with and voices eradicated of the truer form of empowerment based on more direct control of patient recovery services .

What did the mental health charities create ? No patient choice mechanism in mental health has been developed that is of much use at all . No real ownership of services has taken place because the link between being a Service Payer and Patient Choice and its rightful creation of a proper balance of power where services know their place has not occurred .

User Groups sprang up only to be highjacked into dominant charity and govt inspired "mental health promotion" or "work and recovery " related agendas - where was the idea of mental health recovering or managing patients, choosing their way forwards ? It was rendered impoverished.. They were locked out of real choice . The most acute example of that is the (personality disorders ) PD spectrum areas of very little treatment and with the highest suicide rate of all mental health related suicides .

The money to pilot Patient Choice really seriously in 2002 - 4 was highjacked by the U.K. NIMHE's creation and continued existence over several years (£120million - 2004 - 9 ..) and by eliter fitter Users that were mostly its staff or back door supporters.

They have not gone away . They have started to come back post-NIMHE in other forms and UserWatch will be doing more exposures of that later .

Could there be a new more realistic mental health service flag to wave which declares :

"I am a Service Payer because I do believe and will fight for the stand that a patient must have informed choices of fully transparent services and what they have to deliver, not others shaping services so the patient voice is magically wiped out inside the magical notion of a "Nationalised or other User Voice " created by an elite of partly secret collectives, the Labour party or others in charities they have collusively organised with .

I trust patient's potential to make informed choices - not political parties, or their idea bending social engineering philosophies that look after parts of a new bureau-admin-class "Userati" , and the staff that support them ... "

At UserWatch We think its time for the "Service Payers" to rise again as a proper reality that demands open accountability and transparency into service effectiveness and for the services to become services again not masters in disguise as partners.

Services in mental health should be opened up to market choice with competition like life itself. Power of purchase must be given to patients and their GP's. - that context restores patient democracy and power at a level where it can be properly experienced by individual patients .

.
Posted by PatientGuard at 6:01 PM No comments:

Look what we do for you at Christmas ...

Where else would you get quality mental health bullshit...
Posted by PatientGuard at 7:04 AM No comments: