Will Birmingham And Solihull Mental Health User Voice Grow And Become Truly Independent And Help Users Outside Of The Trust Too? 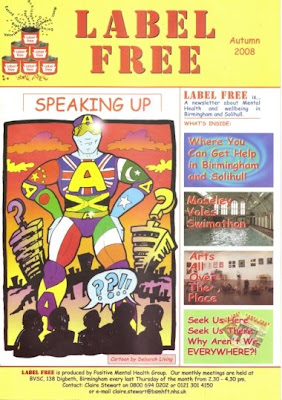 We have heard yet again from a number of unhappy sources that Users are fed up of current in-house "User Voice" arrangements inside the Birmingham And Solihull Mental Health Foundation Trust. We wont be boring about this - there are some new facts to be considered on the financial side too .

The underlying problem is one and always has been of "separation and independence" and a feeling that a "real" User Voice actually does not properly exist in Birmingham .

More Users are sensing "User-Voice's" compromised position within the Trust .. Could it be made independent ? After all Autumn's "Label Free" - a magazine subsidized by the Trust and Birmingham City Council creates focus about better advocacy and how it does not always exist .. They are right - it does not, and it should .. Oh for sure, advocacy of Users exists in patches - but User's Voice "group advocacy" role is very weak and uses money up that could support honed up training and a better User Voice form ..

Taking this point on - it was the case that an Independent User Voice (with better powers of advocacy) was put forward as a feasible structure by the late BSMHT Patient and Public Involvement Forum. The Trust have never been keen on this even though they are absolutely aware of the nearby Debyshire Voice - an independent User Voice which has charity status and it own Trustee Users ... Derbyshire Voice is financed directly through Primary Care Trusts (PCT's) and therefore at a better "arms length" from the Trust it views and works with . The PCT's like it that way - the appropriate tension for accountability is better .

The way User's Voice within the BSMHF Trust is managed and financed gives overwhelming control of the User Voice direction to the Trust. People know its oppressive - they cannot lie about their experiences. It also helps crush the patient voice into something resembling sweetened up but rather brown sniffy fudge .... User Voice workers know it, but the local mental health User-economy which has provided economic positions for some of them has sadly also compromised them ....Enough of them might make a difference to plan a better future if they had the will . Or will they be bought off ? The Trust you see have very cute and long distance ears about all of this ...They watch UserWatch. They do not want an autonomous User Voice any more than they want autonomous Governors who are also feeling pissed off for being like ritual democrats with no real and deeply linked purposes .....

Well they played the game of NHS command and control politics where the bureau-cats prowl oh so very stealthily in the BSMHFT .....And the scratches of being overcompromised become oh so invisible until you meet patients with X-ray integrity eyes..Of-course they see right through it .

Is There A Way Out ?

There is a way out of the Trust's overarching rule . It has to be healthy to want that . Compromise is the nature of the game here because whatever is organised re: User Voice if it becomes independent it has to satisfy some NHS probity. But it can independently exist by pumping up its income base differently and re-constituting and by taking on more skilled advocacy and becoming Third Sector workers that organise outside of the Trust. This role, ordinary well informed Users have argued, is in keeping with PCT's locally financing User Voice directly . But will they ? Curiously there is no perfect reading of this situation in which PCT's in Birmingham seem keen to create more serious autonomy for patients in mental health .. Which leaves patients to either petition them or say nothing and go back to a quarter of a voice ...

And perhaps that is the point . Do patients who are inside a context in which their damages make them like slaves to a system accept that ? Or do they consider vision and more recoverable autonomy that paradoxically must be assisted in the right way ? The Trust have traded on that equation badly - namely the paradox of dependency and assisted growth. The one where autonomy is under command and control and the agenda of what is meant by recovery is still overwhelmingly set by the State .. This is a serious core problem because until Users can create more consumerist type freedoms they are trapped inside managerial command and control equations - a bit like User Voice, that fears seperation because its not being assisted into independent growth properly . Its a question of hanging around the back door of the Trusts body and fearing what is beyond . User Voice is not alone in that - Users with long term damages have talked about this NHS social trap on their lives too ..

At UserWatch we have seen the local Trust continually and easily dominate from the centre and top . We have learned also recently the Trust has £800,000 of funds from the Trust Charities to disperse at rate of 200k per year over the next 4 years . User Voice think on this opportunity - Or is this a step of freed up faith in the Patient Voice that is far too challenging ?

Will you accept the status quo ? Where does it go ? Does it reach into a future in which more damaged people can use a new User Voice company to reach outward into grants for training and special help ? Or does it die in the shadows of poor prospects for all ? ... Who and what vision will you serve User Voice ?

Oh it can be done okay - the creation of a New Independent User Voice we mean .... The vision is there its a question of developing it into a business case - like the PPI partly did and that paper and those ideas still exist ..

Posted by PatientGuard at 5:49 PM

Our "Patients Voice" South Cambridgeshire User Forum (SCUF) appears to have it's head up our chief exec's twat.

The Mental Health Act commission has for the past two years repeated warned the Trust about breaches of the MHA - i.e. failing to obtain consent for medications (section 56?), inappropriate use of section 4 (can't be bothered to get a doctor), failings in the use of section 136 and so on.

SCUF, as far as I can see, hasn't made any representations about this. They are wholly funded by the Trust, the organisers don't appear to be current or former service users.

It's a sick joke on sick people.

The only way forward is to have wholly independent user groups, self-funded and open exclusively to current of former service users.

Yes , most Trusts prefer inhouse control of the "User's Voice".

Its like soft sovietism that eradicates true consumerist democracy . Mental health services are over-confused with duties of containment and there are no areas of choice to break this open properly ... The powerful circularity of admission re-admission and hopelessness in between is at least partly down to a lack of ability to purchase and control recovery choices and supports and added to by connivance by staff with the system that is re-creating more of itself with lead-kennels on ..

UserWatch argues : at the dreadful beginning which means raising the awareness of where people are . For instance you notice that in sovietised culture (state control) when freedom is presented to the populace many did not know what to do with it and there is lag time for people to realise that "freedom" might even exist ..

Learned helplessness is a paradox that can only be pointed to and made conscious . Trusts trade on it in their own ways and use dependency for co-dependent relationships that lead to a comfortable sphere of careers and bugger all real innovation ..

I think UserWatch has to agree that the ideal is independence of Users and their own org which critically interfaces but the problem is breaking out of the cycle where Trusts have a stranglehold over patients and pay off those who will assimilate . The real underlying problem is who owns the resources of purchasing recovery and that is not the patient in the system we have in the UK ..

The Govt are not listening either and they hold many of the resource cards .. Most of the "elite" ex Users went to work for either NIMHE or charities and even Govt - they were bought off and became part of the overall twisted philosophy of "social inclusion" which actually meant a slow ratcheting up of "get em back to work" - make em workarses..

Yeah ..... Its a shit but starting where people are at means raising the possibility of consciousness of their context and how they live in it helplessly ... Beyond is a trial and watching fragmentation of effect . In Bham a petition of 123 people was done supporting an independent User Voice .. It was ignored and User Voice ignored it too but the issue cannot go away any more than any other issue of patient oppressions ..