Blairing Out The Mental Health And Benefit Lies One Year On 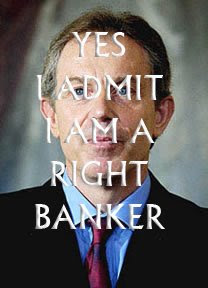 One Year On and in between where bankers with incapacity are now a benefit class relying on the UK Taxpayer what would Tony say :

"Ah its a gliche in the markets"

Yeahhhhh "Tone"..... So much for your policy dream of supporting the growing UK middle classes who simply borrowed more than they could afford in order to support well pensioned lives - kids at university - ever rising property values and many holidays a year as well as early retirements. Of course they could only do this on a credit boom because the UK lost most of its ability to produce anything but administrators of other people's lives and the vacuum of industrial productivity was taken up by the financial sector .. So much for that sector "Tone" ..

Plundering the benefit classes is left though, so we can see that the middle class dream in the future will be buffered partly by that. Its a question of a "welfare raid" being done , and it will happen ..

At least some "buffering" mentally speaking, is underway too, because the strident screams about scroungers have been waiting in the wings have come out from roost to caw in the anti-underclass press. So if politics is about illusions then that is another one that shows that press and politician-led false catharsis is underway at someone else's expense ... Scream and scream again but never at your own folly in the mirror of bugger my neighbour over decades eh?

This brings UserWatch to the false mental health service delivery that was shaped by middle class policy thinkers like you "Tone" who wanted to play the middle ground of softly softly alter the NHS because so many of "our buddies" are working in it and profiting from it . Like the NIMHE Uni-Users who have progressed on to being top-down delivery staff . A few staff do give a damn about patients but the majority are part of the illusory life of being picked off by their own self interest and keeping tactically dumb . Thus the land of the patient is shut up and marginalised and shut off apart from the in-house glove puppets and User-Pinnochio groups .

Anyway "Tone" over to you ... And do us a favour and stop preaching about the Middle East - lets see someone real like Gerry Adams giving advice to both parties and please will you piss off back to some boardroom and be the banker you are - after all one way or another you have lined the poorest up for the Tories and their 19th century love of the moral whippery of workhouse logic .....

"Former prime minister Tony Blair has agreed to take on an advisory role at Wall Street bank JP Morgan. According to reports, he will earn approximately £2 million over the next year from the part-time position, in addition to earnings related to his memoirs, lectures, other advisory roles and public service allowances.

Mr Blair, who started his career as a barrister before embarking on a political career, will offer the investment bank strategic and political advice and will also take part in various client events. He stepped down from his role as prime minister in June 2007 and, according to The Telegraph, is "well on course to becoming the richest former prime minister in history".

Although he is not paid for his position as Middle East envoy, Mr Blair's income from his combined roles which is estimated at more than £10million, is likely to far outweigh his outgoings, which are thought to be approximately £600,000, including mortgage payments and office costs. He will be called upon only when needed, and will most likely give advice by telephone. According to reports, he is planning to take on similar roles with other companies from a range of industries.

JP Morgan operates in more than 50 countries worldwide and its assets are said to total approximately $1.5 trillion. According to the company's CEO, Jamie Dimon, said Mr Blair would be "enormously valuable" because of his vast knowledge and relationships. French president Nicolas Sarkozy is also backing Mr Blair to become EU president next year."
Posted by PatientGuard at 7:26 AM

I wonder about Labour .....seizing right wing wolf clothes heads off the Tory claim to be the only party tough on the "scroungers" .

Tories are never happier than when finding some part of the lower classes or dependent to use as sacrifice to the foxtrotting comfortable who like dispersing death about here and there after a chase ..

Labour will pay for their impersonations which have become a second skin they cannot get off .. Of course many of us will too ..

See you in grave group though - the box ward - jiggling with tasty worms ...Blogging in mud ...