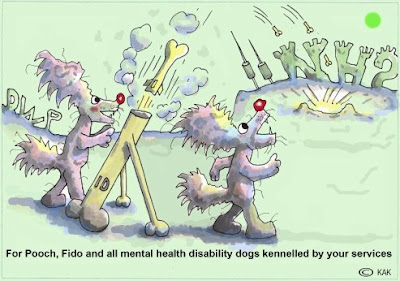 The discovery of explosive Dogpowder made of dog nitrates and collected from the bottom of pissing poles frequently used in NHS mental health establishments by "chemically intelligent" Incapacity Dogs has meant a new rise in attacks on staff ....Yes maybe they were right : "Its something in the water"

Bin bag doggerism as it has been coined emerging with the power of piss though is set to increase as the DWP and NHS combine to create more "crufty" little performance ways to create new scraping around binclusions for mental health dogs....

In a move that resembles the tit for tattery of the Middle East, Incapacity Deputy Dog the self styled leader of ID teams has claimed :

"The Spite is On"

"After all, its all we get from a system that sees poodles at the top of it getting combed and having their arses newly powdered with more expenses at Foundation Trusts pamper-offices...."

Posted by PatientGuard at 7:38 PM

Many a true word spoken in jest.

An interesting idea, to take those of us who are 'differently brained' at the hight of an economic depression and inflate the unemployment figures.

It will also inflate the suicide figures, the homeless figures and in-patient figures.

The policies are designed by Daily Flair readers, convinced that a life of ease and luxury can be bought with £84 a week.

Very few of us will actually find work; even less will will keep the jobs for any length of time.

Jobs will be created - for the sad, sick and twisted people that are already parasitising us and we will be as meat to a mincer.

A more silent holocaust of the spirit is taking place and some of us do really feel it ...

Oh well at least the oven is warm ...Sparkasm lives ...

I shall laugh with the tongues of fire as my ash gets burned ..