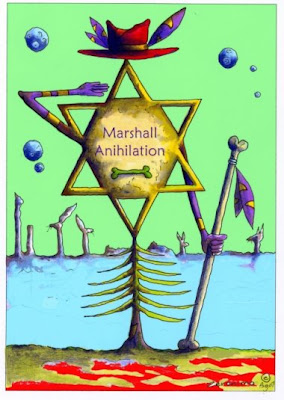 In Gaza despair is normal. Other people with shared religious illusions and claims on lands have progressively and compulsively stretched out into Gaza lands . Their object appears to have been to silence the claims for the cornered and violated voice of Palestinians who are now a concentration camp shadow of Israel's past and its paranoid construct re-shaped by its neighbours into a seige mentality .

Self anihiliation or threatened anihilation of the Self can beget an explosive mixture of behaviours into which final suicide wanders and the voice of suicide is a social critique on everyone. Very few want to hear it thoroughly though . Death as a force too can become so large sometimes that what constructs the suicidal narrative is wiped out - history is lost in the explosions and counter explosions of shells - rage/counter rage violates all - even the ears ... For a time ... God help Gaza and all who live in her ...
We oiled ourselves
With David's star
And worshipped at the
God Of Car