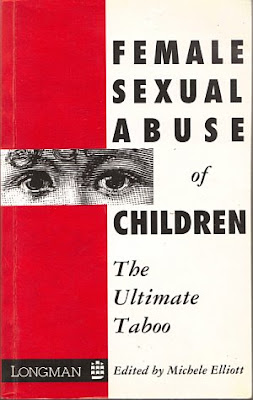 Seeing more fully is the first stage of a healing . Well it can be ....

The BBC have opened up this difficult subject again but it was opened up in 1992 - 3 by Michele Elliot of the Charity Kidscape in London . I recall talking to Michele Elliot in 1992 because she had discovered there were incidents of sexual abuse by females on children . They were not isolated . She was adamant it needed witnessing and hearing .

She planned a book to try to document it . A lot of the contributors as children had been forced to have sexual relations with a female carer-figure (sometimes a mother). The result for some was lasting lives of damage. Some though were more functional than others . No-one can calculate how individuals are differently affected .

Following the book in which I made a contribution I was contacted by members of the public through Kidscape . They often told me terrible stories about their backgrounds and some people were driven close to becoming "psychotic" by those backgrounds and others were working through damages left-over inside them.

It was a multi story-ed battleground of personal and social survival - more like dodging the hell of terror and "you are about to die" - on a field of twisted soul and little social reception for it .

You come away from some of these stories with reactivated pain in yourself - armoured shoulders and finally grief for those you have heard , and grief for yourself ..It hurts to hear people but that is what we are and have - just each other

I am writing this because of the twin observation of poor UK services to deal with these things and nearly 40 years experience of witnessing mental health users of UK NHS mental health services and noting many have told me they were abused - often very substantially . I meet these type of people daily . Beatings and rape and bodily intrusion by others (and mothers) are substantial reasons to suffer from post trauma patterns ..This is often pushed away though . The system has learned not to see , or to see and then close down again . Assisted grieving is not what it is good at.

We are dooming futures by not listening to history fully . Instead too often a label is applied like Personality Disordered or Borderline PD, Self Harmer , or some other semantic slide away from a narrative of a terrible history . After all if you see something deeply you make and take the responsibility to create real and better solutions.

Empathic reception is not a State skill or a supplied form of ministration of the damaged screaming heart that needs it rages, and needs its path to the melting of flames, named grief.

Once again in the UK the BBC fairly raises this abuse-subject that causes an emotional holocaust in children who become emotional damaged and distorted adults coded with the terrible twists of their lives within them - and the cuts to their souls ..The emotional holocaust walkers are all around us drinking and drugging and damaging others , or they are ill ..

Answers ? Oh yes there are answers named empathic reception . The ability to hear and see into others and to help them complete the cycles of their rages against damages and process their deep hurts into grief ..

How do you grieve for a mother or carer who sexually abused you ?

Everlastingly, and on a joint cross, and occasionally you meet grace of understanding . Your childhood is theirs, and theirs is buried in the hands of others that damaged them long ago ...

From the BBC below .

Posted by PatientGuard at 7:02 AM