Mental Health UK And Why Cows Are Choosing To Emigrate 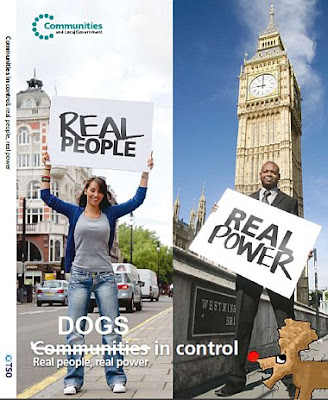 OPINION :
The attempt to create re-engagement over several years by Labour has been flawed. Ahhh, but the attempt is on again with the new Hazel Blears white paper backed by Gordon Brown .

"Communities in control Real people Real power ".
Its total bollox, and, "lets all arrange to be falsely democratic". But lets look at this from our angle and then widen it .

In Mental Health we have seen the "User-Voice" hijacked .... Bullshit governors of Foundation Trusts playing status games and nothing much else, and Trusts loving it because its business and bureacracy as usual, plenty of meetings and sandwiches , and no real patient voice through the mechanism of "Patient-Choice".

Paid for Users now take quasi-representational precedence at Trusts . There's no talk of a conflict of interest there . The terms are not even understood . Dependency on Trusts is higher with these paid Users than others who are out in the raw community surviving the new welfare to work trawls and who can be picked off by Government and got into training which often does not fit them. For some of them , there is sometimes (but rarely) "work" which again is often invented bullshit. There is meaningless attendance at Gov't contractor's Job-centres - and a denial of tailor made ways forwards that are made from a fabric of real choice rather than a State-grey-suit fit for a mind-coffin ..

In Mental Health in the UK we have supported a useless bureaucracy like NIMHE (140) million with its Care Services Improvement Partnership (CSIP) outgrowth, and SHIFT that says it does not duplicate others work but quite clearly is part of Mental Health charities and Govt incestuous circle of people and ex employees of charities or government ... And CSIP cannot even control its own website from linking to Ann Summers Sex Toys and Internet ads that include drugs .. (story on NowPublic.com)

Go and see the document links on CSIP's own website page

The Government are only just waking up to the Net in education .. Twats .. Web 2.0 is here and people are becoming the media alongside what the media is turning into - yet the Net does not hold out mass prospect of work for all and productive jobs in the UK have gone to China and India. We have a bullshit-land . A redundant working class and a backward victorian view of what to do .

Could it have been better in Mental Health though ? Yes .. Patient grants for personal development could have worked far better and afforded tailor made treatments , education and training .. At UserWatch we know a source that has explored and discovered tailor made training in a way that fits certain types of vulnerable Users - it cuts out the corporate wages that are being sucked off welfare by the likes of David Freud's ideas. However lets cut the optimism - Lets be real .. Small is not noticed .. Corpocracy is all ..

Equality of opportunity to have a "Patient Choice" does not exist in Mental Health .. Democracy in that sense is inoperable because it does not follow a simple consumer law that chooses other supplies when one shop turns out to be qualitatively bad ..

Wiser Mental Health Users say virtually nothing because the ears that are open at Trusts filter anything into their own context of dominion and self interest anyway .. If anything, its a trap to be "involved".. Its a kind of tense nothingness where rewards are only given to those who validate false tales about how good the Trust is , treatment is , and User-involvement is ..... Its death of the real and the reward of 30 pieces of existential lead for selling out..

So what is the "real" ? . Its trusted empowered human choice rather than disempowered and narrowed choice created by State dominance ..

A better democratic mechanism can exist in mental health (and more broadly) when people have control of their own lives and budgets .. A bureacracy MUST exist where serious need cannot be catered for but even then splitting up bureacracy into smaller events and truly more local ones makes human sense ... Corpocracy does not make human sense ultimately . It crushes human reality inside the laws of greatest numbers tending towards monopoly and not true innovation ...

Communities In Control spells out satisfaction with tenant forums in Housing Associations - which have only ever seen most of them being compromised by State dominion and not real local control via "Tenant Management Organisations" and self running Co-ops .. Labour is way behind on this. A culture of State knows best will take decades to de-bureaucratise and de-middle-class, because there are so many middle class lives dependent on running other's lives in these housing colonies ..

And listen, we say at UserWatch, the UK perversely NEEDS its internal colonies because it cannot perpetuate class so well without them . Class is important because it creates and locks in differential access to wealth and power and those with advantages will want them to remain .

If we were not right you would see : "Being-fully-Empowered-In The-Uk" on every school curriculum . "Local control of your fate" would be an important module .. Is it there in schools ? No .. Its do as you're told, and lets miss out on creating a knowledge that empowers you .. It's State dominion .. It's safe for the status quo ..

In Mental Health its right to have people rescue people that cannot control their own minds but not keep them as a career colony without some choices existing too of how they recover at a pace and way suited to them that creates a life as opposed to a kind of social nothingness designed for them by everyone else locking the context of deeper empowerment down ..

What of local and national proportional representation too ? Any sound of that ? No .. "First past the post" produces "winners" for a section but also sense of denial for others who do not wish to be representated by the same party . Its fine to have a person with the most votes sit on committees but its also fine to have someone you want to speak up for you who may be different.

All we see at UserWatch is a "Mad State" . Democracy is limited and kept that way and the new play by Labour to make us all into the State is also mad.

We need local and individual control and in Mental Health beyond crisis, we need grants for development that are not controlled by charities and other new bureacracies which the old bureacracies can morph quietly into .. We know this is happening - we have seen it in Birmingham .

"Patient Choice" in Mental Health is liable to become mystified into a few (well linked local providers) all sharing the same Primary Care Trust budgets with cross contractual arrangements and questionable conflicts of interests .. "Choice" will become a magical product in this scenario but hide the fact that its very limited by State Control and agenda's ..

Labour's new State is going to be a nightmare of poorly supported ritual "democratic" groups Third Sectorised - charity-slop and a lack of true consumer control. But who cares ? Not the people involved in this already -they'll sell you out on the back of securing advantage and "being important" ..

Bottom-up drivers could exist (if they were ever wanted) and those would create a new democratically individuating economy so long as the State does not favour new Corpocracies .. People need relationships with the rest of society but not a form of sloppy sovietisation dominated by one expanded class .. At UserWatch we think the UK is drifting into a grey slop .

Groups of sargasso-ites mainly from the middle class will rule the new lands of colonial grey grass in the future ..... And the cows will emigrate ..