Seroxat The Star Rabbit And The NHS Andromeda Strain 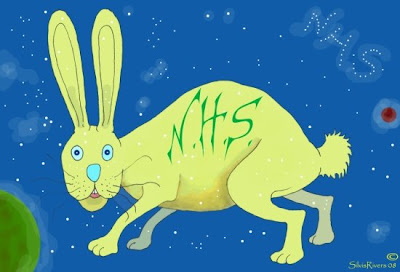 UserWatch in the UK has witnessed so many sad events in mental health recently that we all went off for a therapy session to see Seroxat The (wise) Star Rabbit.

Seroxat though was also weaving in space of his own moaning about someone named Nurse Alice but we did manage to communicate to him by joined up hallucinepathy ...

He put a question to us in that usual mystical rabbit way :

"What is the connection between SSRI drugs like Seroxat , suicides without services , soldiers suffering mental health problems in prisons and the Andromeda Strain ? "

Damn we were in for riddling here and we felt collectively Sphinxed ...However one of the UserWatch team recalled the Andromeda Strain film and the way bodies that had contracted the space virus spilled not blood when cut, but dust ....

Ooooo---eee-----0000............We realised though, like good existential phenomenologists that the Andromeda Strain did not come from outer space . AHA ! It arrived from inner space.....It dried out souls into sands . After all we can no longer tolerate the flow of soul and we attack it with remedies that will wring it out and cut it to dust .

People who burn themselves alive because of no service help (see earlier posts) and those who are not allowed to navigate their own anguish with serious help just run into the deserts and dry out .......Yes , you have it - they are Andromeda strained .

Cognitive Bunny Therapy - claims Seroxat The Star Rabbit is another part of the Andromeda Strain that will dry souls out dead headedly and allow them to believe dried up logic can dominate human feelings . Barring burrows and creating fences for feelings is a way to create long term crazed up flop eared husks, not rabbits or humans that must negotiate inner conflict and human pain .

Says Seroxat The Star Rabbit, while pointing his paw to that dreadful dirty green cheese-dust dried out Andromeda-Strain planet -

"Is also existentially speaking , A leap of wraith"

We agreed. And that ended our hallucinopathic interview . He is wise, is that Star Rabbit...

Be Patient For They Will Cremate Themselves