By Silvis Rivers Reporting On NowPublic.com

Reporting from The UK In Birmingham .

North Birmingham Community Arts in Kingstanding UK is a mental health Service User-led Arts Group . It funds itself - is totally autonomous , and gets the odd grant here and there and survives by donations and a lot of cheek . Yesterday one of the members with learning difficulties was making a second mask from toilet paper which is a pretty good medium with PVA building yard glue and wallpaper paste mixed in .

Its an achievement of some magicality really - wonderful and funny to watch - with a few of us helping the member who does this to make her own creative decisions . This short film accompanying just shows a couple of minutes of snapshots of fun, some fellowship and creativity while one of the members was also strangely ranting on cheekily about mammory's....!

Later we joked as the ghost of Freud (who always joins us) smiled :

Yeah....Its the common theme with those who are damaged by life and have buckled identity and abilities .. So look on and smile .....Compassionately ...And you too can become part of the Toilet Paper Tribe like us .... "Bin-hicans" ....etc . 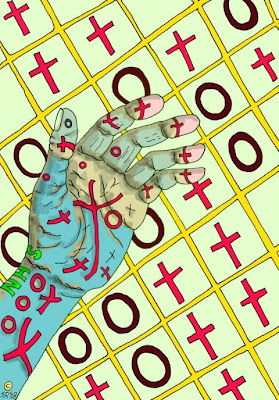 Colville Mark was a Mental Health Service User aged 50 in Camden London UK . In March 2008 he was found dead in his flat . For months no-one had seen him . He was inside the anonymous de-asylumed unconnected modernised servicelessness services now so prevalent in the UK . We have seen some of this in Birmingham too .

He along with 49 others (levels of care for them currently unknown) were chosen to be "unallocated" social workers by the services . Yesss..... That is the new strange reverse-service language of the admin classes who continue to kill patients by service attrition from "afar" in the UK . How about the word "deprived" . He was deprived of a social worker for cost cutting measures.

"Remote effect" , it might be claimed legally of Colville's death, however there are associations between services of choice needed by patient's, Trust diversion of money into needless internalised "user-bureacracy" bubbles, and the need to make financial surpluses by Trusts point toward wearing some patients out and away from Social Care and Health . What was Colville to do ? Protest ? No he was likely just surviving a difficult life ..

Services everywhere in the UK are inside "lean financial policy" demanded of them by Gov't. Board's of Mental Health Foundation Trusts choose death or ill-health of patient's now by default, because if Trust's are making surpluses - and by god they are , then this is done by creaming them off patient care .

The paradoxical nature of this is also patient's do not really excert choice in mental health - they are given what they get - the power of label - is still all - and woe betide them if they enter the discredited NHS complaints procedures which have to change by April 2009 because new Labour fragmented up the Social Care and Health complaints process making them into multi-layered ordeals which only a few people could really deal with - and that was the Ombudsmans opinions .

Below, lets go "over" to Silvis Rivers post on Uksurvivors for his take on the Camden story originally attributable to the Camden News Journal.

He suggested using audit commission figures about Trust surpluses and setting them against patient deaths in the "Trusts"community, and in other ways, where any reasonable person might think that a patient should be getting better support but has in fact fallen foul of the new financial "health and care" systems .


The NHS Trusts are vulnerable to serious criticism (which goes all the way back to the Gov't) based on a comparitive correlative measuring tool I would argue anyone can apply .

Hear this argument out before I get down to that .

A Patient death in Camden (Colville Mark aged 50) - London reveals a continuing lack of care I would argue . The Coroner reported a death that could not be ascertained properly . So there's the admin-class's clever end of it as far as they are concerned . Colville was schitzophrenic and was deemed to be capable of looking after himself and his medication needs

The Camden new Journal reported Colville Mark was one of 50 who were "unallocated" (a social worker) .

"Mr Mark was one of the patients considered well enough to be discharged and referred back to us if any problems occurred in the future." She added: "We had 50 patients unallocated after losing two members of staff from the community team."

Services though everywhere have come under the "lean policy" push to make savings and surpluses.

You have to bear in mind that we have the much vaunted so called "Patient & Carer Preference" (of treatmemt) still being bandied about . The truth however is attrition of service at the expense of creating more "Voice" (bureacracy) . This costs money too and that will be another factor diverting costs away from frontline care too .

Colville Mark's life was inside attrition policy both locally and nationally . And "Patient & Carer Preference" to shape treatment is limited by Govt lean policy which creates over-centralising over-managing power even inside Trusts with a mixture of demands to make surpluses and new "credible" elements of Trust dominated User-bureacracies ..

So when Colville died was his Trust in surplus ? Yes . Was his life worth more than a new User-bureaucrat ?

The Trust achieved its financial break even target and reported a surplus of
£1.68 million for the financial year. This was in excess of the surplus of £1.18 million budgeted for, which had been agreed with NHS London. The Trust also met all other key financial targets and delivered approximately £6 million of efficiency savings.

For 2007/08, the Trust has set a budget of delivering a £1.75 million surplus and after four months of the financial year is currently showing a surplus of £578,000, in line with the expected position. Achieving the surplus is dependent on the Trust delivering its £4.8 million of cost improvement programme, some of which is planned to be secured later in the year. The Board will need to ensure that the savings is monitored closely, with action taken if any slippage occurs."

The admin class will shout "NO PROOF" - but the noughts and crosses are building up in the community and the patient's are not winning the game . they are dying . I will try to report this more because witnessing this and saying something, is the last power we have inside so much powerlessness .

So Uks tribe, alongside you might wish at any time to to Ukking well measure any patient deaths through lack of care against surpluses made at their services - its a tool of embarrasment to the admin classes who oh so skillfully brush the patient's cremated dusts under the national health service carpet

Locate the Trust of the patient-dead, and put into Google the Trust name, and year of accounts, and "surpluses"..

Posted by PatientGuard at 3:35 AM

Made by Mandy said...

If you let them, these suits will have you running around collecting all the evidence to show they are shifty...and although I admire your determination in trying to get some accountability...I fear the chances of getting any are, well, non existant.

Freedom of Information Acts. How long does it take for them to be acted on? Months? Years?

The system promotes itself and those who promote it.

Mandy UserWatch has no hope really . Hope is unrealistic in the world we have of mass weave and snake dances.

We are just here . A useless witnesses thrashing about whilst being bitten by snakes and thrashing about makes our kind of arts and spit show ..We like spitting - it makes the snakes blink

But being without hope does not mean we are always despairing - no sometimes we are pisstaking and even pissing on the snakes....

Its our way of making wisdoms rain