West Midlands Labour Party Where Are The #MH2 Activists? 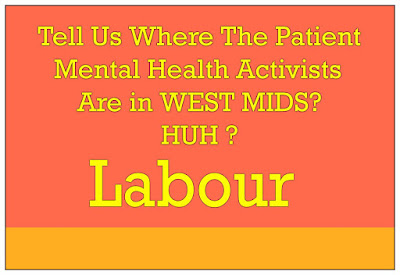 We had information passed onto us about the deserted areas of Mental Health activism in Birmingham and the West Mids.  Someone had phoned up to ask West Midlands Labour:  "Where are the Mental Health Activists?" ....The answer we understand  was :

"We do not know, there might be some but we do not know who or where they are"  ... That's been passed onto us. So now you know it's a deserted area apart from the "right noises" once in while coming out of MP's mouths

For sure we are wondering too.. The latest anti-benefit 2018 Work Driven Recovery Model/designs by the CCG Commissioners  across Birmingham trying to get Serious Mental Illness (SMI's) into work raises real concerns.

We've had it passed onto us that some concerns have been raised with Jack Dromey M.P.  and others.. One major concern is how come the Birmingham  SMI's involved have not had a proper audit of how many were child abused?  It's known on the patient community that many patients have been wrecked as kids like that. It's important so a view can be taken on how to remedy long term unheard damages.

We, like others and many professionals know all this is buried inside Mental Health systems and it has caused lifelong fragmentation of many minds..... We know because:  "Trust Us We Are Patients". We have already pointed out too on UserWatch that Psychologist John Read's 2006 meta-study of altogether 30 thousand studies showed high correlations with child abuses and later psychosis.

We know of many life-stories too and the shattering origins of so many buckled minds who were often switched off by drugs from any fuller witnessing of their Selves in psycho-dynamic type therapies ... You might ask :  What  therapies are on offer to the SMI's who are being driven into a Work Driven Day Service Recovery model?  Bugger all  actually.

A pilot type CBT type exercise we understand was done in 2015 for about 28 Bipolar Users in Birmingham and Solihull Mental Health Foundation Trust.

So evidentially a few SMI's have had lightweight CBT in the SMI's population in Birmingham   (see Aaron Becks ideas on what CBT is) ) which is a type of rationalist approach.... A few ... But CBT does not cut the mustard when people need to deal with mourning historical child abuse/trauma damages which emerge as  felt trauma in their bodies. There was only one Personality Disorder type we could see in the pilot at the BSMHFT  and no Schitzophrenics.. (the type often with high child abuse trauma backgrounds)

Those few SMI patients we have heard from  in Birmingham,  who purchased private therapies know their childhood damages were rarely heard for years and years in the NHS services and thus they knew there is an unaddressed trauma-drive to seek a "Hearing" ..... It's an unmet need .. It's an emotional/biologic drive to be seen and heard properly. Otherwise we are ape-like-dogs and barking without fully articulating what's really happened and needs mourning (crying about). Without help kids dissociate too but the energy of trauma comes through in the end.

But there is largely a CBT monotherapy culture  in the UK although around the edges of it there are still some practitioners of mixtures of other approaches....SMI's have languished therefore for years often without a hearing help for their inner worlds of memory and feelings.

In Sweden, monotherapy approaches using CBT has given way to the use of Psychodynamic Therapy too which reveals and heals feelings ...it's been said there by their National Audit Office  that one type of therapy actually damages mental health.

Deep pained feelings in many SMI's are those very things (historic unresolved feelings) that drive the pain inside them of the unheard child inside damaged adults that end up hearing the voices of original persecutors that never wanted to hear them anyway ....Punished for existence .  You can do a lot about the past of emotional damages - you can create hearings and  places to cry and be witnessed properly. You can rebuild selves that way to tolerate the terrible things that have happened to them through emotionally mourning events... In tears ..Otherwise the emotional past powers itself all through any part of the rational mind like a steamroller into a crisis.

Not in the Birmingham NHS though does emotional focused solutions predominate with it's rationalistic rich mental health bureaucacy and often superficial anti-emotional/risk averse ways ... How can anyone truly heal if they are not allowed to truly feel as deep as they need to ?  Poor SMI's do not stand a damn chance in life without better more enduring therapies and hearings.

"Get 'em to Work ! ....".... The 19th Century survives still with it's blacking out hatred of pained feelings/emotions put into policies that ignore the vast truth of often child abused lives .....Therefore in Birmingham SMI's are being sold the wrong policies and drivers to get well .... That's not just a shame ...It's wasting money and time and creating jobs for the 3rd sector chosen to deliver the dream of Commissioners and the Government ...What are they?  Work Chains on Service Users by newer service classes with shared intellectualized illusions .....
Posted by PatientGuard at 9:59 AM