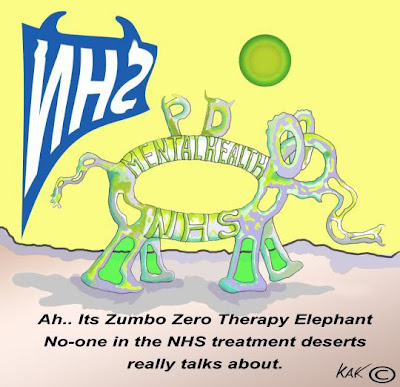 Cartoon By That Thoroughly Bad Kakatoo

Yes its been seen wandering across the UK ...

Partly invisible perhaps but it's led to heavy marks in the grounds of many peoples souls ..

Many have been been crushed by the footfall of tons of grey existential and emotional nothingness. Certainly in Birmingham they have with its appearance-culture of "therapy" ...

However , greyly it wanders and dumbers along the NHS mental health services too, often undetected .

Journalists are seeing it now though . Maybe they have had a brush with it too and their grey ink spilled on it .. Haha .... Revealed !!! At last there's a national Zerophant of therapy discovered ..

26th September 2009 : The Daily mail reports on thousands of UK PTSD affected troops crushed by the after effects of war :

"The National Association of Probation Officers (Napo) described 'overwhelming of evidence' that ex-servicemen do not get the specialist help they need, with thousands who suffer from post-traumatic stress disorder (PTSD) struggling as their family and work lives collapse."

In their cases often the elephant crushes them inside prison where they have found themselves after being unable to re-adapt to life .

Ahh but do not worry there's the £ 173 Million Improvement To Access In Psychological Therapies Programme in the UK (IAPT) ... Or is there ?
Sunday 4th October 2009 : The Observer reports :

"It has also emerged that the lion's share of the £173m budget for the programme will not be ringfenced as mental health experts had originally believed. Instead the remaining £100m yet to be allocated will be spent however NHS trusts choose."

Already criticised for its "one size fits all approach" - because of its drive to create Cognitive Behaviour Therapy (CBT) as an answer to depressions - it is looking uncertain in the new banking incapacity economy being propped up massively, that the UK cannot afford to eke out even CBT programmes .

"Experts said that in the jaws of a recession this will "inevitably" mean the money will be transferred from the programme to other more "visible" frontline NHS services, a move that will have a drastic impact on its efficacy.

The possibility is likely to dismay the programme's supporters who believe it offers a vital alternative to the tens of millions of antidepressants, such as Seroxat and Prozac, that are prescribed by doctors in the UK every year. Using Cognitive Behavioural Therapy (CBT), which helps people challenge negative thought patterns, the programme, which will run until 2011, has been heavily promoted by the government as an antidote to "Sicknote Britain"."

So maybe its drugs drugs and drugs again ... Somehow time's never change and the Zerophant walks on right across people's lives .. Oh... except for bankers whose eyes are crying joyfully with their new liquidity at everyone's expense .
In the Personality Disorder circles UK wide - therapy is a rare commodity . Drugs are first choice at NHS Trusts and although the UK Wide PD Spectrum Survey is still being written up as a report - it can be revealed that overwhelmingly NHS Trusts offer drugs and the survey shows that .

And what's the choice of post traumatised people with PD or more severe borderline versions of PD ?

The suicide rate in those with PD is very high . Often post traumatised from childhood rape or abuses those with PD and versions of it in the UK kill themselves . 44 - 77 % of UK suicides (taken across years ) are PD types ..

The shock in Britain now too is PD types after several attempted suicides can elect to create a advance statement as in the recent case of 26 year old Kerrie Wooltorton to die in hospital with no help.

Gone is the criticism of the failing NHS therapy system to dig deep and risk resolution . Its easier to see that "incurable" emotional pain is a self administered death sentence explained away by a UK anti-painful-emotion society that has only just in 21st century started to create nationwide programmes that may well now be crushed ...

"Miss Wooltorton had an incurable, emotionally unstable personality disorder and a history of self-harm, and had in the past been sectioned and admitted to Hellesdon Hospital.

At the time of her death she was living in her own home in Hellesdon Close, but was having some treatment from Norfolk and Waveney Mental Trust. She had previously accepted life-saving treatment to flush a toxic alcohol from her system up to nine times in the year before her death."

Kerrie Wooltorton's death is not that far removed from the helpless state of so many struggling with deep inner pain that must be humanly received , reflected and held empathically with a depth that must touch and give witness for as long as it takes to approach healing .

Incurable ? Yes many pains in the human condition are - but managing the damage with some life preserving empathic therapy and help that supports suffering become resolving grief and loss is a way .

Do Mental Health NHS Trusts do this well ? Ask Kerrie Wooltorton . Ask the soldiers in the UK prisons . Ask the PD sufferers ..

What of Birmingham ? Their roll out of the IAPT programme - or associated to it is supposed to come on stream with 79 "IAPT" therapists (12 low intensity and 67 High intensity ) but the real issue will be measuring its effectiveness over a few years . The Dept of Health look as if they are almost paranoid about trying to measure it . How do we know ?

"Insiders blamed the way the programme had been introduced for some of its "teething" problems. There has also been confusion over how NHS trusts are recording their performance. Last month the Department of Health issued them with new guidance on targets, the fourth time it has done so. One person familiar with the programme said it did little to encourage a relationship between practitioner and patient and that "some patients ended up spending more time filling in forms than being with someone".

"Iapt is a great idea whose implementation seems to have gone wrong," said David Pink, chief executive officer of the UK Council for Psychotherapy, which has argued for the scheme to be expanded to include more forms of therapy. "Now there is a danger it no longer seems to be improving access to psychological therapies."

Norman Lamb, the Liberal Democrats' health spokesman, said it was "utterly outrageous" that the government did not intend to protect the programme's budget. "It will inevitably be curtailed as a result," he said. "The same thing will happen this time round as in the last recession – mental health will lose out because it's an easy target."

What is the real problem with the UK ?

the Dept of Heath remains too overpoweringly centralised in Mental Health matters and the Gov't pay too much heed to big charities like the Sainsbury Centre For Mental Health , Rethink and MIND. These charities are on a stigma-adventure and money spinning exercises that often are rooted in a culture of clever ex civil servants morphing across to the charities and influencing policy far too much . The work orientated CBT therapy recovery plan (much applauded by the charities) for mental health was always top down in its design and not led by a proper culture of GP and patient purchase power of local market tested therapies which could have formed the basis of a growing patient driven culture of experience and practice which GP's could have intelligently noted and shaped over time .. But quicker than the Dep't of Health !

The Patient is still in choice-lockup ..Totally cogged off and unoiled while the evidence shows the big charities have been swilling about in money totally spolied, with stigma ideology that does not uphold real campaigns for patient power of choices of therapy treatments . Varietyless CBT and the like are what exist .

What a waste of lottery money too its all been , £18 - 20 mllion on a class of people at the top Charities that are just better off by skewing vision away into the rigma versions of social engineering and away from bad top down services they actually helped to plan .....User Involvement is perverse and its selective-inclusion only . Patient Choice is not . Its about real need being met for all paces and types .

Stay away from mental health Charity hypnotists and snake charmers .. See the Zerophant and the semi invisible themes you are not supposed to notice ... Be real about need . Wake up . Feel the Zero . Own it .

Posted by PatientGuard at 2:49 AM