Mental Health Personality Disorders in The Birmingham Community Get a Look in ? 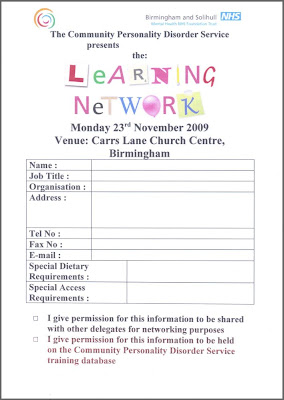 By a U.W. correspondent

It's early days , it always is , in a Groundhog-day type of way , in the Personality Disorders community that is often promised some kind of better resources but tends to get excluded even when its promised to be "Socially Included"

Does anyone recall the Dept of Health paper :

"Personality Disorder No Longer A Diagnosis of Exclusion" ......

Ahhhh those days of promise and flags of dangled hope...

However, we hear rumours that some staff at the Birmingham and Solihull Mental Health Foundation Trust NHS "Main House" (A "specialist" PD service) together with others have formed a Community Personality Disorders Service at Ardenleigh near Erdington Birmingham UK . The piece of rare evidence we have is a form for a "Learning Network Meeting" to be held on the 23rd Nov 2009 At Carrs Lane Church in the Birmingham City Centre .

This information we think is not being distributed that well and appears to be given out rather selectively ..

Whatever happened to information and distribution of it embedded in Patient and Public Involvement ethos ... ?

It appears its partly being eaten up by the practice of pseudo-democracy where you can hardly tell the difference between the bureaucracy and those who it has captured to examine services ..

Blurring accountability has become everything under New Labour .. In mental health its still rife with cross organisationality of NHS provisioned mental health charities (inside conflicts of interest) and ex Users and other careerists that has taken the place over and above Patient Choice and Patient's truly being in charge of their own recovery services.

The hidden costs must be massive but as usual unauditied .

The PD services must become opened up to choice of therapies and the driver of an autonomising patient culture that creates good practice by individual pace and innovation which fits. It must involve GP's as a solid axis of purchasing power that is not solely derived from the overcontrolling agenda's of the Dept Of Health . Real choice fits people not because its ideological but because people need control , the growth of autonomy - and a range of possibilities that fits different degrees and types of damages in people's personalities .. The State can only screw that up if all the supply side money is in their planning dominion .

The Community Personality Disorder Service - at Ardenleigh Erdinton Birmingham can be contacted on 0121 301 6855 for further details about the above meeting .

Posted by PatientGuard at 5:24 AM