Stability For Who? Did You Get Your Therapy Yet? 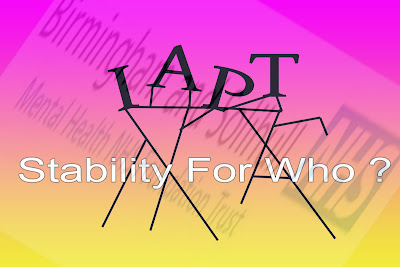 IAPT as it is known, in short means "Improvement In Access for Psychological Therapies". For years its been rolling out here and there and yet in the area of what should have been patient choice it avoided that - instead becoming a DWP related prefered model of choice to tighten up the nuts and bolts in an economy without too little export led engineering anyway ... The whole country has not been fit for purpose for years .. Deluded by bureau-jobs and a growth in the "middle classes"

We at UserWatch hope someone runs a survey soon that is owned by the public and for the public because a considerable amount of money was shunted through trainees in 2009 - 2010 (£2.6 million) and its time the public experience was tested.
Rumours persist that so far an IAPT contract or set of contracts to serve Birmingham has not been finalised as yet . Meanwhile Patient Choice creeps on and on and perhaps in a few years it will become real . It may be hit by a tsunami of needs though as the welfare tectonic plate state creates crushing misery and slavery like conditions for some to survive in .

GP consortia in Birmingham are quite slow and far behind in their social psychological knowledge and arguably in the need to organise and localise more supply and provide real choices that are not simply 3rd sectorised for under-cutting value .

The BSMHF Trust looks set to try to plug the gap with an attempt to create a 5 year contract but will it succeed ? Will outgoing PCT commissioners favour that ? Will GP consortias in Birmingham be ready to take on IAPT responsibilities ? Where there is a lot of "will's", there's chaos ...

Its worth reading Sue Turner CEO's feb 2011 report and what she has to say . It reveals to a mapping out of GP consortia's in Bham set along PCT boundary type lines .. 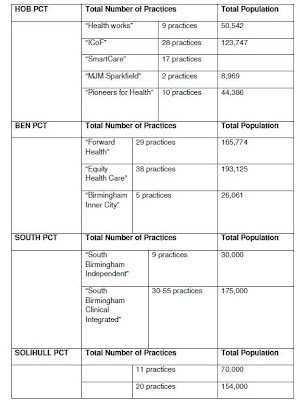 Posted by PatientGuard at 4:18 PM