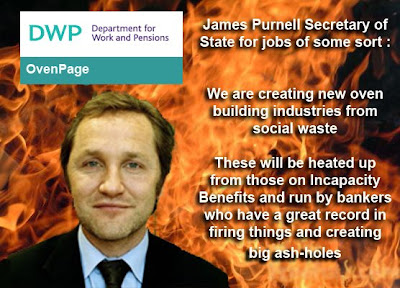 Keeping middle class people warmed is important in the UK . NHS CEO's now get well over £100k worth of woollies . Surestart a single mother social and job inclusion scheme started by Labour for disadvantged is used extensively by the middle class . 400,000 graduates look set to get special help of up to £2500 for internships in the recession and middle class people get mortagage help on the back of a credit black hole they and others helped to create .

Class apartheid ? Class hatred ? Nahh ...Surely not ... Mental health users though and the disabled are set to be re-tried for their disadvantages . Re-jobbed in some kind of way by a bankers-ideas (David Freud) .

Gone are the days of (NIMHE's ) "experts by experience" in mental health (MH) - but it was a term anyway that benefited the university type MH Users most, who stocked out NIMHE . The whole economy has now lost pleasant idealised picture pieces and the policy saw is rejigsawing another picture frame - but you can bet the middle class, who will accuse you of "class hatred" if you raise consciousness of their advantages , will be the first to get adaptive advantages .. They need their social warmth and they'll do it by framing others for the fire ..

No wonder there is crime , bad mental health and division in society with perpetuated lost opportunities ......The resource argument on a class basis is never had fully - never socially examined deep enough.. Its even pushed further down into the competition for resources with new ethnic groups from europe or anywhere, and then termed "racism" if it emerges rawly in underclass sentiments .... What a bloody social-confidence trick the UK is ... It creates a dog class and then kicks it .

Congratulations though to asian people in Birmingham (by god they showed local politicians up) and moslems in the UK for having the balls to stand up at the Town Hall for the Gaza Palestinians (the dramatically marginalised) while the rest of the UK middle classes worries about its graduates and the way the financial systems they exploit and support, tripped them up and over...

Middle-class families have the biggest debts in the country with many borrowers owing more than £50,000, a study reveals.

Those living in wealthier areas such as London and the South-East have borrowed almost four times as much as those living in Scotland and parts of the North-West.

The report by the credit reference agency Experian also shows that an individual's debts have typically risen by more than £2,000 over the last year.

Posted by PatientGuard at 3:52 AM