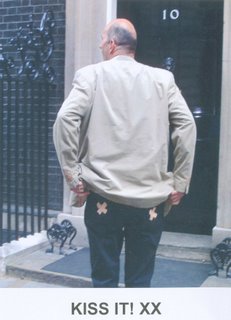 Aiden Shingler and Catherine Ingram presented the "KISS IT" petition of 1000 petitioners to No 10 Downing Street on August 10th 2006 .

The serious side of the petition is to bring to public attention the abuses of psychiatry from poor treatment experiences to forced Electro Convulsive Therapy and uses of drugs on patients to make them compliant..

The petition was linked to action on the same day to a group 0f mental health survivors and supporters of the "Kiss It" campaign led by Dr Rufus May who had led a 60 mile hike with a hospital bed which finally arrived at the old site of Bedlam where "lunatics" were "treated".

The combined events have brought attention to the way the State treats people even though it claims to be modernising.

Userwatch is sympathetic to Derbyshire Voice a more genuinely independent and representative version of the "User Voice " than many NHS Trust sponsored in-house mechanisms. Many Derbyshire Voice supporters have supported the "Kiss It" campaign since its beginings ..
See :

Kiss It
Posted by PatientGuard at 5:46 AM